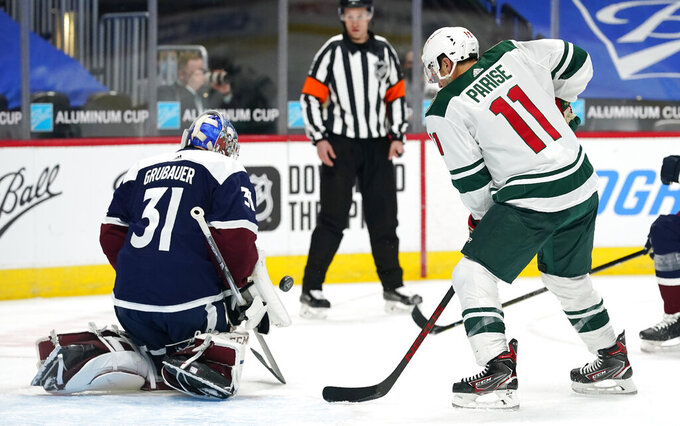 NHL referees and linesmen are holding pre- and postgame meetings virtually, not eating meals with one another and taking all the necessary precautions to limit time spent together.

They're seeing one another less but players much more, the result of a unique schedule with teams almost always facing off multiple games in a row. Working consecutive games between teams has allowed officials and players to build more of a rapport than usual, even amid coronavirus pandemic restrictions.

“It’s different,” Philadelphia's Travis Konecny said. “It’s kind of fun. For me, I’m still young in the league, so I haven’t had an opportunity to really ever talk to some of the officials and get to know them too well. It’s a chance to build some relationships and see a couple familiar faces out there.”

While familiarity breeds contempt on the ice among opponents, it's having the reverse effect for the men in stripes. Officiating teams get to communicate more with players and learn their tendencies outside the intensity of a playoff series when tensions can be high for everyone.

“You definitely want to be nicer in the first game, I think, just to say, ‘Hello, how are you doing, how’s the room service been?’” Washington defenseman Brenden Dillon said. “When you do have that familiarity and you kind of get to know the guys, I feel like you can build a bit more of a relationship other than just the guys that are yelling at one another on the ice.”

Players and officials are also running into one another away from the rink more because they're staying in the same city more often. NHL director of officiating Stephen Walkom joked about the extra interaction: “They have no choice because a lot of times they’re the only people at the hotel.”

Passing in the hallway of a hotel is breaking down some of the adversarial nature of that relationship, and it could be keeping penalty calls under control, even as rivalries build between teams already weary of seeing the same foe over and over. League stats show that penalties aren't any higher through the first quarter of this season.

“It’s great for the players and the officials to know each other as human beings,” Walkom said. "And we have quite a few officials that don’t have a ton of experience in the league, so it certainly accelerates their learning with certain players. That’s been something that’s been positive that’s come out of seeing the same teams.”

Walkom is pleased with how officials have handled all the adjustments, including the need to alter arrangements at 18 of 31 arenas to follow virus protocols. Players are adjusting to it all, too, even if they're not thinking much on the ice about seeing the same referees a few times in a row.

“I don’t think you have to change your game,” Dallas forward Blake Comeau said. “Obviously without fans you can hear everything out there, so as a team I think we’re going to try to stay off the refs, let them do their job. I don’t think it benefits everyone by yelling and screaming at them.”

So far, 34 games through Tuesday have been postponed because of the virus, and three teams are paused through at least the weekend. New Jersey was up to 19 players on the league's virus protocol list, Minnesota 12 and Buffalo nine.

Sabres GM Kevyn Adams still expects his team to play all 56 regular-season games, and there has been no indication yet from the NHL that it will sort playoff standings by points percentage.

It seems like Columbus is at the center of the league this season.

First there was Pierre-Luc Dubois' change of scenery request, his benching and blockbuster trade to Winnipeg for Patrik Laine and hometown kid Jack Roslovic. Then the Blue Jackets were on the wrong end of a bizarre botched video review in a loss to Carolina on Sunday. And then coach John Tortorella benched Laine on Monday.

On Tuesday, Mikko Koivu abruptly retired because he wasn't playing up to his expectations. What's next? Oh, Tortorella is in the final year of his contract, with no extension in place.

The St. Louis Blues and Arizona Coyotes face off Friday for the fifth time in seven consecutive meetings, a record for an NHL or NBA regular season.