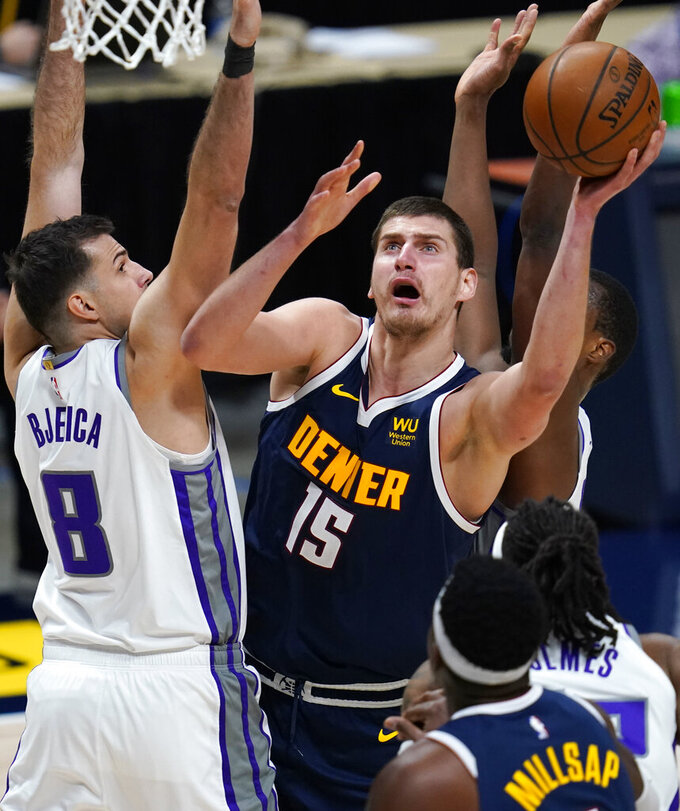 DENVER (AP) — Buddy Hield tipped in Harrison Barnes’ miss at the buzzer, lifting the Sacramento Kings to a stunning 124-122 win over the Denver Nuggets in overtime Wednesday night.

Nikola Jokic recorded a triple-double with 29 points, 15 rebounds and 14 assists, but he had a crucial offensive foul with 2.6 seconds left in regulation and lost the ball on the inbounds with 6.5 seconds left in overtime when Barnes punched it loose.

Hield led Sacremento with 22 points and Barnes and De’Aaron Fox each added 21 for the Kings, who snapped a six-game skid in Denver, where they had last won on Jan. 3, 2017.

Fox also had a key block of Will Barton’s shot in the final seconds of overtime.

Michael Porter Jr. scored 24 points for Denver, but playoff star Jamal Murray was held to five points and was 1-for-9 shooting before fouling out late in regulation.

Jokic sank a pair of free throws to tie it at 112 with 29.4 seconds left in the fourth quarter but he was whistled for an offensive foul with 2.6 seconds remaining.

The Kings turned the ball over and the game went into overtime minus Murray and a pair of Kings starters who also fouled out — Marvin Bagley III and Richaun Holmes.

Nuggets: Porter scored a quick five points but took a seat after banging his left knee when he fouled Harrison Barnes at the 7:49 mark of the first quarter. After getting some ice and running on an elliptical machine, he returned at 11:07 of the second quarter and ended up playing less than seven first-half minutes.

Both coaches made a point of speaking to their teams about the situation in Houston, where the Rockets’ season opener against the Oklahoma City Thunder was postponed when coronavirus cases and James Harden’s violation of the NBA’s COVID-19 protocols left the Rockets without enough players.

“Not surprised. Just look at what’s going on in our country, around the world. COVID is a lot bigger than the NBA,” Nuggets coach Michael Malone said, adding these were “side-effects” of playing outside a bubble. “That will not be the last game that’s postponed due to COVID.”

Said Kings coach Luke Walton: “We talked about the Houston situation today and how one thing can affect the entire group. The tricky part is that you can do everything right and still get hit with this.”

Nuggets: On Christmas night, they host the Los Angeles Clippers, one of the teams they rallied to beat in the playoffs after falling into a 3-1 hole, a development that led to a Clippers offseason shakeup.