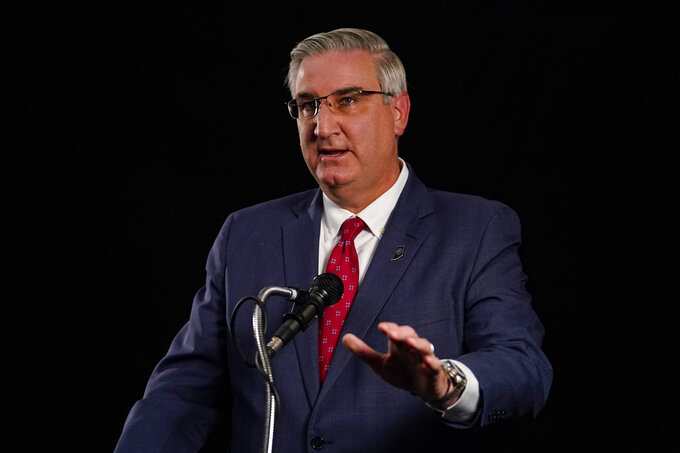 INDIANAPOLIS (AP) — Indiana Gov. Eric Holcomb has tapped his senior education advisor to serve as the state's first secretary of education, marking the first time in more than a century the state schools superintendent position isn’t decided by voters.

Katie Jenner will officially take on the role Jan. 11 after current Superintendent of Public Instruction Jennifer McCormick leaves office. Jenner will immediately focus on helping schools navigate the coronavirus pandemic, in addition to shaping state policy on education funding, school accountability and testing, according to the governor’s office.

“This is an incredibly important time for education in Indiana," Holcomb said in a statement Thursday. "(Jenner) has focused her entire career on investing in students, teachers and staff, and she will continue to build the relationships needed to move our state forward in constructive ways."

Under new state law, the state schools chief was removed from the ballot in November. Instead, a secretary of education — largely charged with implementing and administering policy — is chosen by the governor. Unlike the voter-elected state superintendent, the education secretary will report directly to Holcomb as a member of the cabinet.

The switch to a governor-appointed state education secretary was originally approved by Indiana’s General Assembly, with a planned start date of 2025. Lawmakers filed legislation last year to move the change up to 2021 after McCormick announced that she would not seek a second term in 2020.

Less than two weeks before the November election, however, McCormick switched her position and accepted a nomination tap from Democratic gubernatorial candidate Woody Myers to ensure “continuity” within the state’s education department, especially amid the ongoing coronavirus pandemic. Her “outrage” over “woefully underfunded” teachers and schools across the state also influenced her desire to remain in office, she said.

McCormick’s endorsements of Myers and Democrats during her tenure laid bare her split from Holcomb and GOP legislative leaders since she was elected to be state schools superintendent in 2016 with Republican Party support. She has disagreed with Republican legislators on several education issues including the use of standardized testing to rate schools and teachers, and her support for increased scrutiny of charter and voucher schools that receive state money.

McCormick has accepted a position as senior vice president with EES Analytics, a data analytics company that will launch in January, according to a Wednesday news release.

Until now, Holcomb had remained quiet about any potential appointment picks, previously saying he would wait to review recommendations until after Election Day.

Jenner has previously served as a vice president at Ivy Tech Community College. She additionally worked as a career and technical education teacher in Kentucky, and as an administrator for Madison Consolidated Schools in Indiana. Currently, Jenner is also on the governor’s commission tasked with making recommendations for how to improve teacher salaries.

"My priorities are to ensure high quality education for all students and families, and to provide solution-focused support for our teachers and educational leaders,” Jenner said in a statement Thursday. “We have great opportunity ahead in Indiana, and I can’t wait to roll up my sleeves and work hand in hand with students, educators and stakeholder partners across the state.”

Jason Bearce, Indiana Chamber of Commerce vice president of education and workforce development, said Jenner's prior roles “are a big positive” for the business community, and will help ensure that younger Hoosiers “are prepared to pursue relevant and prosperous careers.”

“The Indiana Chamber has long supported making Indiana’s top education official an appointed position so the governor has someone aligned with his policy priorities in such a key role,” Bearce said in a statement Thursday. “That enhanced level of cooperation and collaboration will make the state’s education direction clear and allow for more impactful efforts on behalf of Indiana students.”