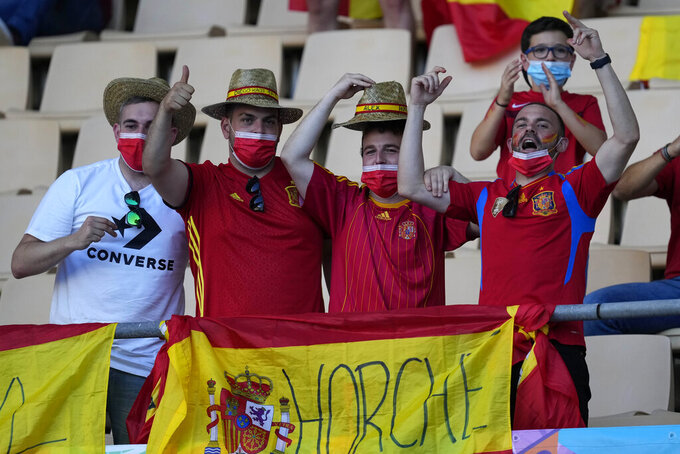 SEVILLE, Spain (AP) — Home-field advantage wasn’t much of an advantage for Spain at the European Championship.

Spain is one of nine teams hosting matches at Euro 2020, but playing in Seville didn't seem to help much on Monday in a 0-0 draw against Sweden.

Not only didn't the result go Spain’s way, but the team also had to deal with poor field conditions and even boos from the home fans.

“It’s much better to play when the fans are applauding than when they are jeering,” Spain midfielder Pedri González said. “But I prefer to focus on the applause of the fans who motivated us. That will help us a lot more than if we focus on the negative things.”

More than 12,000 fans were at La Cartuja Stadium for the match against Sweden, and most were supportive of the national team. They proudly honored the national anthem and loudly chanted some players' names. But many grew unhappy and didn’t hide their discontentment as Spain struggled to capitalize on its scoring opportunities.

Most of the jeers were directed at striker Álvaro Morata, especially after his big miss in front of the net cost the team an easy goal before halftime. The dissatisfaction of the crowd could be felt every time Morata was involved in a play. He was booed by a large number of fans even while being substituted in the 66th minute, although some did applaud.

“I’ve seen two types of reactions,” Spain coach Luis Enrique said. “One maybe more critical of him, but I focus on the second one, when the fans chanted his name. I was a lot happier with this second reaction. It’s obvious that everyone wants to feel loved and supported.”

Luis Enrique and some of the players also were not happy with the less-than-perfect conditions of the grass at La Cartuja.

“The field didn’t help much,” he said, noting that his better players had problems controlling the ball on what looked like an uneven and dry grass. “They complained about it. We need it to be in better conditions so we can play our best soccer.”

Local organizers downplayed the problems with the field but vowed to do everything possible to improve it ahead of Spain’s match against Poland on Saturday.

“If the team had scored a goal we wouldn’t be talking about this,” said Elías Bendodo, spokesman for the Andalucia regional government that oversees La Cartuja. “Anything that can be improved will be improved.”

All three of Spain’s group matches will be played in Seville. A round-of-16 match will also be played in the southern Spanish city.

Spain was originally scheduled to play its matches in the Basque Country city of Bilbao but UEFA changed venues after contagion rates for the coronavirus in northern Spain would have made it impossible for many fans to attend matches.

The choice for the 60,000-capacity La Cartuja — instead of either Sevilla’s Ramón Sánchez-Pizjuán Stadium or Real Betis’ Benito Villamarín Stadium — was made in large part because of a Spanish soccer federation deal with officials in the southern region of Andalucia. The four-year agreement reached in February made La Cartuja the main venue for matches involving Spain’s national teams.

The large venue, which can't be fully filled at this year's tournament because of the pandemic, doesn't promote a very inspiring fan atmosphere, and the running track around the field leaves the crowd far from the action. The stadium was built for the 1999 track world championships that Seville hosted.