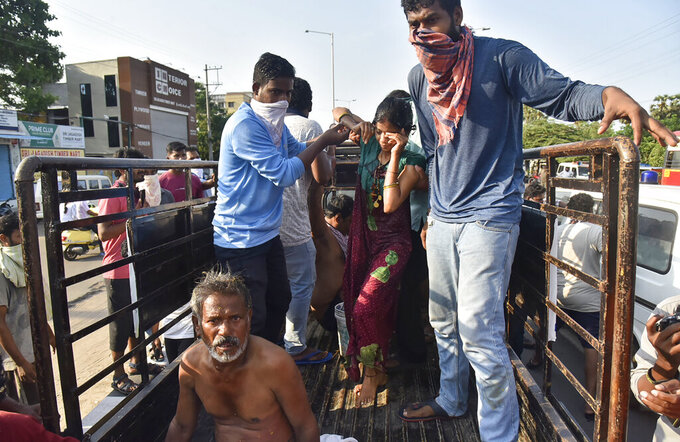 People affected by a chemical gas leak are carried out of a truck to an ambulance in Vishakhapatnam, India, Thursday, May 7, 2020. Chemical gas leaked from an industrial plant in southern India early Thursday, leaving people struggling to breathe and collapsing in the streets as they tried to flee. Administrator Vinay Chand said several people fainted on the road and were rushed to a hospital. (AP Photo)

HYDERABAD, India (AP) — Indian police on Friday filed charges of culpable homicide, including negligence in handling toxic substances, against a South Korean-owned chemical factory where a gas leak killed 12 people and sickened more than a thousand.

The chemical styrene, used to make plastic and rubber, leaked Thursday from the LG Polymers plant, owned by LG Chem, while workers were preparing to restart the facility after a coronavirus lockdown was eased.

The cause of the leak in the city of Visakhapatnam in Andhra Pradesh state was still unclear, officials said Friday.

A state administrator, Vinay Chand, said authorities flew in chemicals from a neighboring state to neutralize the gas completely before allowing people to return to their homes.

Chand said 316 people were still being treated in hospitals and were in stable condition. State police chief Damodar Gautam Sawang said 800 people were released after treatment on Thursday.

Styrene gas, a neurotoxin, can immobilize people within minutes of inhalation and can be fatal at high concentrations.

The police charges accuse the plant's operators of endangering the public through negligence. Under Indian law, culpable homicide is classified as killing not amounting to murder. Penalties range from 10 years in jail to life imprisonment.

India’s top environmental court also asked LG Polymers India to pay a $6.6 million penalty because of “damage to life, public health and environment.” The National Green Tribunal said the factory appeared to have failed to comply with environmental and safety rules.

The court formed a committee to investigate the accident and identify lapses.

Videos and photos after Thursday's leak showed dozens of people lying unconscious in the streets, with white froth trailing from their mouths. People fled on foot, on motorbikes and in open trucks as police officers, some wearing gas masks, rushed to get people out of their homes.

The scene evoked bitter memories of a gas leak from a Union Carbide pesticide plant in the Indian city of Bhopal in 1984 that killed at least 4,000 people and injured another 500,000, many of whom still have health problems, according to the government.

LG Chem Ltd. is South Korea’s largest chemical company and produces a range of industrial products, including petrochemicals, plastics and batteries used in electronic vehicles. It is part of the family-owned LG Corp. conglomerate, which also has an electronics arm that globally sells smartphones, TVs and personal computers.

South Korea’s Foreign Ministry said Friday its ambassador to India had expressed regret and condolences over the gas leak. A ministry statement said the South Korean government is closely monitoring efforts to handle the aftermath.

The coastal city is an industrial hub known for frequent gas leak accidents. In December 2019, a leak from a pharmaceutical company killed two people.