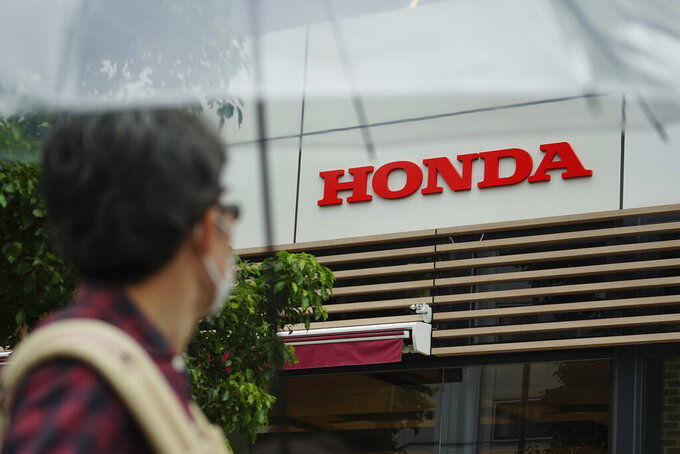 A man wearing a protective mask to help curb the spread of the coronavirus walks past the logo of Honda Motor Company Thursday, May 13, 2021, in Tokyo. Honda swung into the black in January-March, recording a 213 billion yen ($2 billion) profit, despite the ongoing uncertainties unleashed by the coronavirus pandemic, the results, released Friday, May 14, 2021. (AP Photo/Eugene Hoshiko)

TOKYO (AP) — Honda swung into the black in January-March, recording a 213 billion yen ($2 billion) profit despite the lingering impact of the pandemic.

Tokyo-based Honda’s profit for the fiscal year that ended in March totaled 657.4 billion yen ($6 billion), up 44% from the previous fiscal year.

The company said its vehicle sales rose in Asia in the last quarter but fell in the U.S. and Europe. Motorcycle sales also recovered in Asia.

The maker of the CR-V sport utility vehicle, Gold Wing motorcycle and Asimo robot said it’s adjusting to the semiconductor shortage, which is hurting automakers around the world.

“There is still a lot of uncertainty ahead because of the COVID-19 surge,” Honda's chief operating officer, Seiji Kuraishi, told reporters.

He acknowledged some Honda production is being affected by the semiconductor shortage.

In Japan, the pandemic has affected workers’ commutes, and some dealers around the world had to shut down, shorten hours or reduce services for as pandemic precautions.

Among Japanese automakers, Toyota Motor Corp. also reported a recovery in January-March, with its profit more than doubling to 777 billion yen ($7 billion).

Nissan Motor Co., whose brand has suffered over a scandal involving its former star executive Carlos Ghosn, is trimming its losses but expects to remain in the red for the fiscal year through March 2022.