Hondurans forming migrant caravan for US stopped in homeland 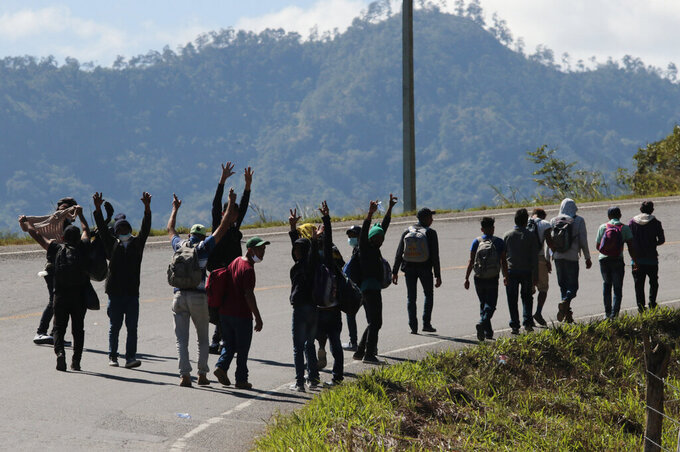 Migrants walk on the road on their way North near Agua Caliente, close to the border with Guatemala, Thursday, Dec. 10, 2020. Honduran security forces stationed on the highway a few kilometers before Agua Caliente, asked the migrants for their passports or identity cards and proof of a COVID-19 test, and if they did not produce those documents they would not be allowed to move on. (AP Photo/Delmer Martinez)

SAN PEDRO SULA, Honduras (AP) — Hundreds of Hondurans trying to start a new caravan to reach the U.S. border were stopped by Honduran security personnel Thursday before they even reached the border with neighboring Guatemala.

The Honduran police and immigration agents asked their countrymen to show travel documents and proof of negative coronavirus tests, which none appeared to have.

Many of the migrants said that two recent hurricanes had devastated their homes or livelihoods, and they set out late Wednesday on a trek toward Guatemala, Mexico and the U.S. border. Last week, Honduran President Juan Orlando Hernández himself visited Washington and warned of possible food shortages as a result of the storms.

The roughly 600 men, women and children had gathered Wednesday night in the northern city of San Pedro Sula and began walking along a dark highway toward the border with Guatemala. But as they approached the border crossing at Agua Caliente, the Honduran agents said they couldn't continue without documents.

“What do we have to return to?" migrant Angela Castellano asked one of the Honduran agents. Castellano set out with her baby and her husband for the United States, after her husband lost his job at a banana plantation.

“I lost everything, my child's passport, his clothes, everything. It's not fair they're doing this to us,” Castellano said as she wept. “I tell my boy, ‘I have no home, I have no food to give you.’ He just cries for milk.”

About 150 migrants sat on the roadside leading to border crossing, wondering how they could continue their journey. Hurricanes Eta and Iota hit within weeks of each other, causing widespread flooding in Honduras.

“There is nothing, my brother, we lost everything,” said José Samuel Reyes, a resident of San Pedro Sula, the country's industrial hub and the area hardest hit.

Hernández last week traveled to the U.S. to seek help from the Trump administration, warning that his country is on the brink of food shortages as a result of the back-to-back hurricanes that triggered massive crop loss and paralyzed the economy.

The faces of the would-be migrants reflected that despair.

“We are going here only with what the hurricane left us,” said Edgardo Calderón, who said he was setting out with part of his family to the U.S. “to see what happens.”

According to the International Federation of Red Cross and Red Crescent Societies, more than 4.3 million Central Americans, including 3 million Hondurans, were affected by Hurricane Eta alone. Those numbers only rose when Iota, another Category 4 storm, hit the region.

While some caravans in 2018 and 2019 made it to the U.S. border, the most recent attempts have routinely been stopped. In October, security forces in neighboring Guatemala turned back another large group of Hondurans who tried to abandon their country.

In addition to the hurricanes, families from Guatemala, Honduras and El Salvador are seeking to flee economic devastation caused by the coronavirus pandemic as well as chronic problems of violence and poverty.

After slowing for the past year, apprehensions of migrants on the southwestern U.S. border began to rise in September and were up more than 50% in October from the previous year, according to U.S. Customs and Border Protection data.

The victory of Democrat Joe Biden in the U.S. presidential election has raised expectations that he could soften immigration policy.

However, none of that means that the journey north is easier. The possibilities of reaching the United States or even Mexico are slim due to mobility restrictions imposed against the pandemic and the strengthening of immigration controls that were put in place since 2019 in both Mexico and Guatemala due to pressure from the Trump administration.