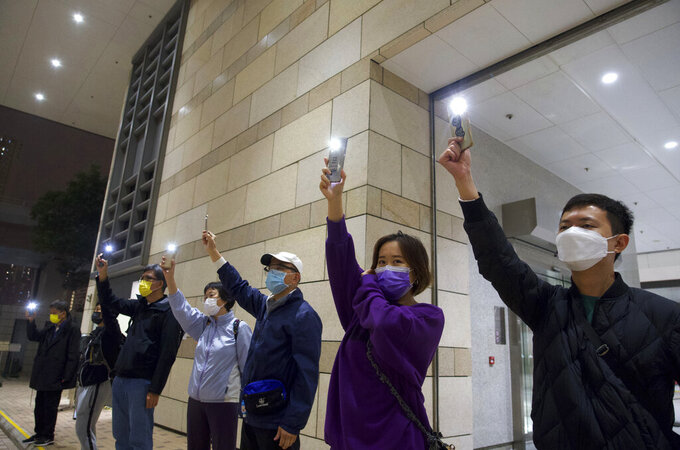 HONG KONG (AP) — A Hong Kong court on Thursday granted bail to a fifth pro-democracy activist and former lawmaker but revoked bail for another, after both were charged with subversion under the national security law.

They're part of a group of 47 activists and former lawmakers who were arrested over their involvement in an unofficial primary election last year, aimed at determining the strongest candidates in a legislative election that was later postponed due to the pandemic.

Authorities say the primary was part of a plot to paralyze the government and subvert state power, as at least some of the activists had planned to vote down major bills and force Hong Kong leader Carrie Lam to resign if their pro-democracy camp had gained a legislative majority.

The city’s High Court on Thursday granted bail to former Democratic Party lawmaker Helena Wong, who was one of the candidates in the primaries.

Her bail conditions include surrendering all travel documents and observing a curfew. She is also banned from speaking with foreign officials, making speeches or engaging in acts that violate the national security law, and running for office.

Despite releasing Wong, the court revoked bail granted to another activist, district councilor Ng Kin-wai. Ng will be remanded in custody.

Both Wong and Ng are part of a group of 15 defendants who were initially granted bail last week, although they were all later kept in custody while the Department of Justice filed an appeal.

Prosecutors have since dropped their appeal against four other defendants, who were released last Friday.

The other nine defendants will have their bail reviewed on Saturday and Monday.

The remaining 32 defendants who last week were either denied bail or withdrew their applications for bail will continue to stay behind bars. The next hearing is May 31.

The mass charges against the activists marked the most sweeping action taken against the city’s pro-democracy camp since the national security law was implemented last June.

Under Hong Kong’s common law system, defendants are usually granted bail for non-violent crimes. But the national security law removed the presumption of bail, with a clause saying it will not be granted unless the judge has sufficient grounds to believe defendants “will not continue to commit acts endangering national security.”

Critics say the law, which was imposed by Beijing in response to sometimes violent pro-democracy protests in 2019, erodes the rights and freedoms promised to Hong Kong under the “one country, two systems” framework following the handover from British colonial rule in 1997.