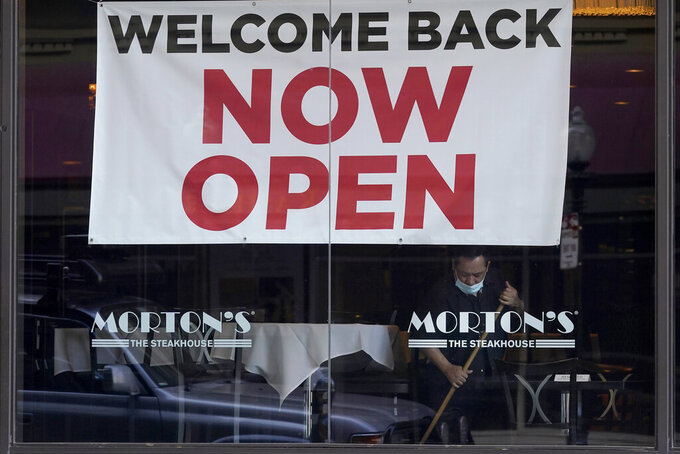 FILE - In this March 4, 2021, file photo, a sign reading "Welcome Back Now Open" is posted on the window of a Morton's Steakhouse restaurant as a man works inside during the coronavirus pandemic in San Francisco. California added 141,000 jobs in February as more than a quarter of a million people returned to the workforce. The California Employment Development Department said Friday, March 26, that the state's unemployment rate in February was 8.5%, down from 9% in January. (AP Photo/Jeff Chiu, File)

SACRAMENTO, Calif. (AP) — California added 141,000 jobs in February as more than a quarter of a million people returned to the workforce, state officials announced Friday, a reflection of loosening virus restrictions on businesses as more people get vaccinated.

Employment in restaurants and hotels surged by more than 102,000 people, welcome news for an industry hit hard by the on-again, off-again restrictions imposed by the government at the whims of an unpredictable virus.

The state lost 155,400 jobs in December and January when Gov. Gavin Newsom ordered a sweeping lockdown amid frightening increases of cases, hospitalizations and deaths. But California gained 91% of those jobs back in a single month, dropping the unemployment rate to 8.5%, according to new data from the California Employment Development Department.

That's the lowest rate since the pandemic began.

“The California job machine has been turned back on after a dismal two months,” said Sung Won Sohn, a professor of finance and economics at Loyola Marymount University.

But California's recovery appears to lag the rest of the country. Its unemployment rate is more than 2 percentage points higher than the U.S. as a whole, tying Connecticut for the third highest rate among states behind Hawaii and New York.

California has regained just 39% of the 2.7 million jobs lost in March and April of last year when the bottom fell out of the economy. Meanwhile, Sohn said the U.S. as a whole has regained 56% of jobs lost.

Overall, California had 1.2 million fewer jobs in February than it did a year ago. The state processed more than 108,000 unemployment claims last week, the second week in a row that new claims have surpassed 100,000 after a decline in February.

Still, declines in the numbers of new coronavirus cases and hospitalizations point to improved job numbers in the coming weeks. More than 94% of the state's population now live in counties free from the state's most severe virus restrictions.

California has been receiving about 1.8 million vaccine doses per week. But that's expected to jump to 3 million doses per week by mid April — enough that Newsom announced on Tuesday all adults will be eligible to get the vaccine starting April 15.

“There is a growing confidence that the bottom is definitely behind us,” Sohn said.

But the economic impacts of the pandemic are likely to linger. Close to 1 in 5 workers in California have claimed unemployment benefits for more than six months, according to an analysis by the nonpartisan California Policy Lab at the University of California.

People who are unemployed for long periods of time often have a harder time finding a job. And once they do, they typically earn less than they had been before they were unemployed, said Till von Wachter, professor of economics at UCLA and director of the California Policy Lab.

Since the pandemic began, more than 45% of workers who were either employed or actively looking for work in February 2020 have claimed unemployment benefits. That figure is even higher for Black workers, with nearly 90% filing for benefits.

“African Americans have applied for unemployment benefits at astounding rates, further evidence of the inequities we must address to ensure a strong, equitable recovery,” California Labor Secretary Julie A. Su and Dee Dee Myers, director of the Governor's Office of Business and Economic Development, said in a joint statement.