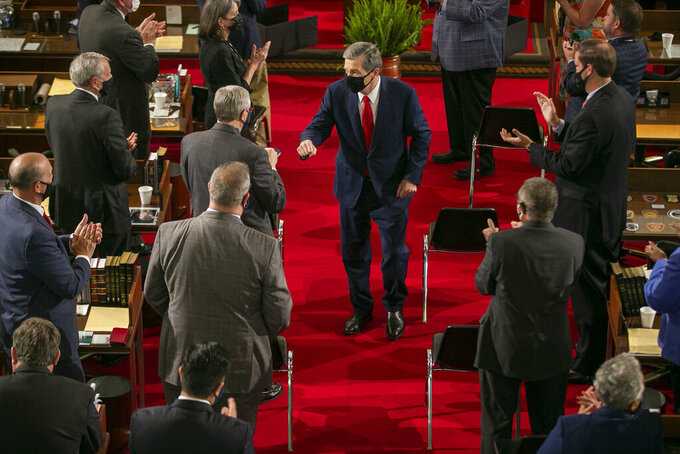 North Carolina Gov. Roy Cooper leaves the House chamber after delivering his State of the State address before a joint session of the North Carolina House and Senate, Monday, April 26, 2021, in Raleigh, N.C. (Robert Willett/The News & Observer via AP)

The measure put forward by Rep. Keith Kidwell, R-Beaufort, would also bar state public health authorities and licensing agencies from requiring North Carolinians to get vaccinated in order to obtain a license.

It's perhaps the most mild of a string of anti-vaccination proposals brought forward by Republican state lawmakers. The measure passed 75-38 with support from 10 Democrats and all GOP members present and now heads to the Senate.

Cooper has strongly encouraged residents to get vaccinated but has been reluctant to mandate it or turn it into a hot-button political issue. He and his health secretary, Dr. Mandy Cohen, have instead promoted a message of a quicker return to summer activities once more people get vaccinated. They have also vowed to ease pandemic restrictions, such as the indoor mask mandate, once two-thirds of adults in the state have gotten at least one COVID-19 dose.

The Democratic governor has long said he supports giving people an online version of a document certifying they were vaccinated but has shown little interest in a statewide policy requiring people to prove they received a COVID-19 vaccine in order to access government services.

Some GOP lawmakers wish Kidwell's proposal would have gone further.

North Carolina lawmakers last week advanced a bill last week to prohibit state and local governments from firing or retaliating against employees who decide not to get a COVID-19 vaccine.

During debate of Kidwell's proposal on Monday, Rep. Larry Pittman, R-Cabarrus, referenced a proposal he's put forward that has received much resistance. His plan, House Bill 558, would prevent schools and child care facilities from requiring proof of a student’s COVID-19 vaccination, or any other vaccinations. Scores of demonstrators who like his bill came to the Legislative Building last week to seek its passage.

The plan appears unlikely to advance ahead of a Thursday deadline in order to be considered this legislative session, though there are other ways his ideas could be rolled into future legislation.

Pittman unsuccessfully tried to introduce an amendment that would reward businesses that decide not to mandate vaccinations for their employees or customers with immunity from civil liability.