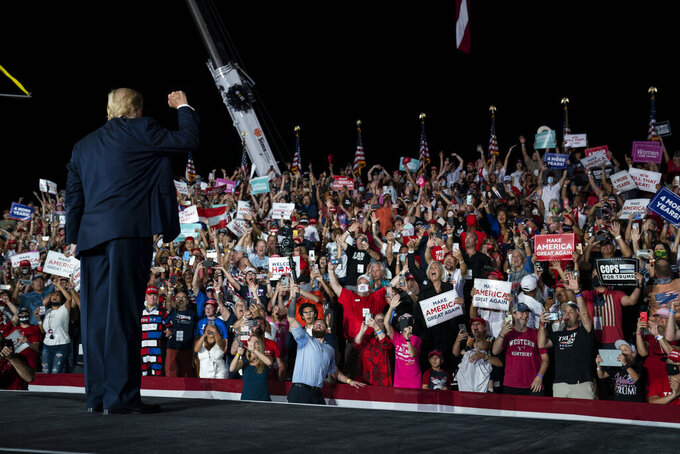 President Donald Trump pumps his fist as he walks off after speaking at a campaign rally at Orlando Sanford International Airport, Monday, Oct. 12, 2020, in Sanford, Fla. (AP Photo/Evan Vucci)

WASHINGTON (AP) — In 2016, Donald Trump's campaign chairman shared polling data with an associate suspected of ties to Russian intelligence. Another Trump associate sought inside information about Democratic emails stolen by Kremlin operatives. The candidate himself invited Russia to hunt for his opponent's emails, then tried to stifle investigators once he entered the White House.

These were among the findings of the special counsel investigation of ties between Russia and Trump's 2016 campaign. It produced a trove of damaging, or at least embarrassing, information about Trump. Yet in the 2020 campaign, Democrats are largely ignoring the Russia probe. It's Republicans who are making it a top campaign issue.

Trump and his supporters have cast the investigation as a witch hunt. It's a refrain in Trump tweets and speeches and on conservative media. In the run-up to the election, Trump-appointed officials are ordering the declassification of documents that Trump hopes will boost his campaign.

While some of the revelations from the steady drip of newly declassified documents are serious, they do not undercut the reasons the Russia probe was launched or its principal findings. An inspector general and a bipartisan Senate panel have both concluded that the probe was valid.

A look at the Russia probe:

WHY WAS THE INVESTIGATION LAUNCHED?

The FBI opened “Crossfire Hurricane” on July 31, 2016, after learning a Trump campaign aide may have had advance knowledge that Russian intelligence operatives had stolen Democratic emails.

A diplomat revealed that the aide, George Papadopoulos, had boasted to him that he had heard Russia had damaging information on Democrat Hillary Clinton that it could release to harm her campaign.

That May 2016 conversation triggered alarms within the FBI since the Russian hacking operation, which resulted in the public disclosure of thousands of hacked emails, was not yet public knowledge.

WHAT DID THE INVESTIGATION FIND?

The investigation was taken over by special counsel Robert Mueller, whose team documented substantial contacts between Trump associates and Russia.

That included a Trump Tower meeting with a Russian lawyer that Trump's oldest son, Donald Trump Jr., took with the expectation of receiving dirt on Clinton, and a campaign chairman, Paul Manafort, who shared internal polling data with a contact whom a Senate Intelligence committee report characterized as a Russian intelligence officer.

He was not criminally charged, but he wasn't vindicated.

It is true Mueller said his investigation did not find sufficient evidence to establish a criminal conspiracy between Trump, or his associates, and Russia to sway the election. But the investigation also described broad Russian interference as well as a campaign that was eager to receive the help and expected to benefit from it.

Mueller also investigated multiple episodes in which he found Trump tried to exert control over the investigation, including by firing his FBI director, but Mueller did not push forward with obstruction of justice charges, citing Justice Department policy against indicting a sitting president.

WHAT ARE THE CRITICISMS OF THE INVESTIGATION?

Most focus on one strand: the FBI's suspicion that former campaign adviser Carter Page was a Russian agent. Page has denied that and was not charged with any wrongdoing.

The inspector general identified major errors and omissions in applications the FBI submitted to a secretive court for permission to eavesdrop on Page. For instance, the FBI failed to update the court as it received new information that undercut its original premise about Page. It also highlighted how the warrant applications relied in part on Democratic-funded research conducted by former British spy Christopher Steele.

The problems are significant because they suggest the FBI misused intrusive surveillance powers or withheld information from the court. The FBI was alerted that Russian disinformation could have made its way into the dossier of research, and a key source for Steele was himself once investigated by the FBI for possible connections to Russian intelligence, newly declassified documents show.

Multiple former FBI and Justice Department officials have said they would not have certified the applications had they know then what they know now. FBI Director Chris Wray has issued more than 40 corrective steps to prevent the problems from recurring.

But the Page aspect of the probe accounted for only a fraction of it, and the dossier — though the target of much derision — had nothing to do with the decision to open the investigation. The Page problems don't relate to the criminal convictions that Mueller's team produced against six Trump associates, or the 25 Russians indicted on charges related to election interference.

HOW ARE REPUBLICANS WEAPONIZING IT?

In an extraordinary mix of politics in America's national security apparatus, Trump has demanded that intelligence and Justice Department officials act to discredit the Russia investigation before the Nov. 3 election. To a large extent, they've complied.

Much of the declassified material involves Page and the dossier. But they've also released information that, while creating buzz in conservative media, offer scant evidence of wrongdoing.

Officials declassified the names of Obama administration officials who had requested the “unmasking” of an American — in this case, former national security adviser Michael Flynn — who surveillance revealed had interacted with Russia's ambassador, but who wasn't identified by name in intelligence reports. While Trump cast the unmasking as sinister, it's a routine action and proper procedures were followed.

Separately, some Republican senators are seeking an inspector general investigation after records showed multiple members of Mueller’s team had forgotten their work phone passcodes or entered the wrong ones too often, causing data to be lost. One of the prosecutors, Andrew Weissmann, has said in media interviews that the issue is overblown since the information was backed up.

More recently, the national intelligence director, John Ratcliffe, a Trump loyalist, declassified what he said was Russian intelligence analysis even though he acknowledged the information might not be accurate.

Meanwhile, Attorney General William Barr has appointed a prosecutor to investigate the origins of the Russia probe. That prosecutor, U.S. Attorney John Durham of Connecticut, has secured a guilty plea from a former FBI lawyer for altering an email related to Page's surveillance.

Trump has demanded big-name indictments and called for the probe to be completed by Election Day. But it's not clear when Durham will finish his work or what it will reveal.

HOW IS THE RUSSIA PROBE FIGURING IN THE PRESIDENTIAL CAMPAIGN?

Even before it was released, the Mueller report was seen as potentially devastating to Trump, with its details about campaign ties to Russia and the president's efforts to hinder the probe. Yet Democrats have hardly mentioned it. Leading in the polls, Democratic nominee Joe Biden has focused instead on Trump's handling of the coronavirus pandemic and the divisiveness of his presidency, issues that may be more likely to resonate with voters.

Meanwhile, attacking the Russia probe is a core part of Trump's campaign. Trump and his supporters have often mischaracterized the investigation, with Trump falsely claiming that President Barack Obama spied on his campaign. Vice President Mike Pence falsely suggested at a debate last week that the investigation had vindicated Trump.

Those attacks on the Russia probe may not win over many undecided voters. But they could energize Trump's base at a time when the campaign needs a strong turnout in crucial battleground states.