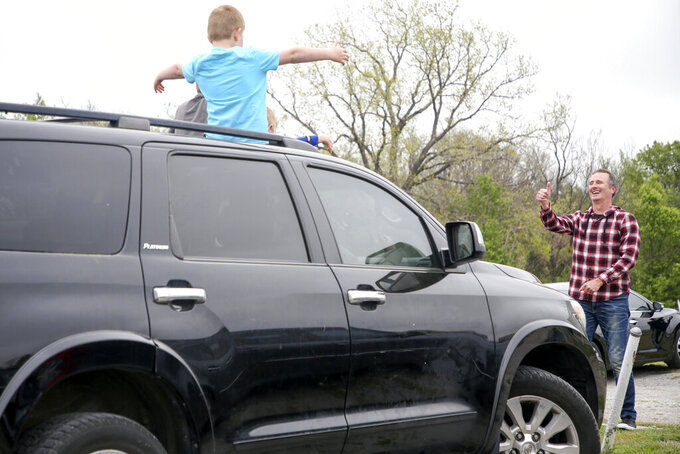 In this Sunday, April 5, 2020 photo, CommonGround Pastor Tom Dillingham gives a thumbs up to a car while a church goer gives a social distance appropriate hug during a drive-in church service at Admiral Twin Drive-In in Tulsa, Okla. (Ian Maule/Tulsa World via AP) 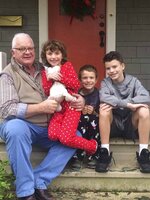 To the lengthy, sorrowful list of losses from the pandemic, add these: hugs unexchanged, visits unmade, hands unheld.

Just when many feel they need it the most, the comfort of physical closeness is being denied.

Dr. Loren Olson, 77, a psychiatrist in Urbandale, Iowa, misses the hugs and kisses from friends who gathered for potlucks and dominoes and movies, before they all holed up only to emerge for grocery runs. He thinks of the clients whose final appointments are approaching, the ones he’ll never get to send off with a handshake despite months of wrenching therapy together. The embraces he would have gotten on visits to his daughters and grandchildren are deferred, and no one quite knows how long.

“I didn’t know how important that was to me until now that I don’t have it,” Olson says of those lost touches.

Then there is the thing in the back of his mind — how those who contract the virus have often been robbed of final moments with the people they love because hospitals desperate to stop the spread have had to isolate patients and bar visitors. Olson and his husband have talked about how they would want to die in one another’s arms. Conjuring it any other way seems too painful.

“To think that people are dying without that," Olson says, "is tragic.”

Terrorist attacks, natural disasters and mass shootings have been followed by survivors clutched in the arms of loved ones — people collectively gathering to mourn, hands of neighbors grasped in prayer. But the pandemic has rewritten the script of tragedy. Final goodbyes may come by phone or not at all, travel to familiar places and faces is nixed, and people already living isolated lives are more cut off than ever.

One of those friends Olson has been physically cut off from is Ryan Weidner, a 41-year-old financial planner, who now gives “air high-fives” to his assistant and “air hugs” to his teenage children. His 63-year-old father was diagnosed with COVID-19 and, though Weidner is certain he’ll recover, his underlying chronic obstructive pulmonary disease is a concern.

Normally, he’d rush to drive eight hours to Michigan and wrap his father in a hug. But at a time that’s anything but normal, he’s left to think of the last time they saw each other, parting ways after a Thanksgiving trip to Mexico.

“You always think to yourself, what happens if you don’t see them again?” he says.

Some have been sustained by a video call, a palm pressed to a window or a blown kiss. But it’s not the same. Not really.

“There’s something still to be said about the human touch and being there in person,” said Aliza Sherman, 55, of Anchorage, Alaska, who sees her 13-year-old daughter on Zoom but is prevented from visiting her at the mental health facility where she’s being treated. “I just want to give her a hug.”

Graciela Tiscareño-Sato, 53, of Castro Valley, California, thinks of those who are blind like her daughter, who rely so much on their sense of touch to connect. When they go to the store now, she warns her daughter not to extend a hand to the cashier as she normally would. And when her mother-in-law’s 79th birthday came, the family left a strawberry-rhubarb pie outside the door, then backed up and sang from across the lawn.

“Imagine now trying to explain to your child why she can’t hug her grandmother,” she says. “You’re very much missing the human contact when you’re standing 30 feet away.”

For April Kahgee, 37, of Petoskey, Michigan, it means there’s no certainty when she’ll be able to greet her fiancé, who lives in Australia, with her usual “flying tackle hug” — charging at him full speed, then launching into his arms. Their plans to narrow the 9,000-plus miles between their homes are on hold and their wedding is canceled.

For Jarrod Holland, 45, of Wilmington, North Carolina, it means his long-awaited first date with a woman he met online will most definitely not end with a first kiss. They planned to eat takeout in a park, then take a walk, all at recommended “social distancing” guidelines.

And for Frida Yufa, 77, of West Hollywood, California, it means visits from her daughter are executed with surgical precision — a quick call alerting her arrival, bags of groceries left on the balcony and nothing more than a smile exchanged.

Dr. Anne Peterson, who runs global programs for Americares, has been overseeing shipments of tons of protective equipment and other supplies to health workers around the world. Over the years, her work has involved responding to outbreaks of cholera, plague and Ebola, and the lessons of safe distancing ingrained her mind.

At home in Seattle, though, it’s more of a struggle as she tries to care for her 90-year-old father. He laments her sitting across the room. She worries that if he loses his balance, she might not be able to catch him.

“I’m done with this,” he told her. “I don’t care if you have coronavirus. I need you here beside me.”

Matt Sedensky can be reached at msedensky@ap.org or, on Twitter, at @sedensky.