Hungary pulls its ruling party out of EU's conservatives 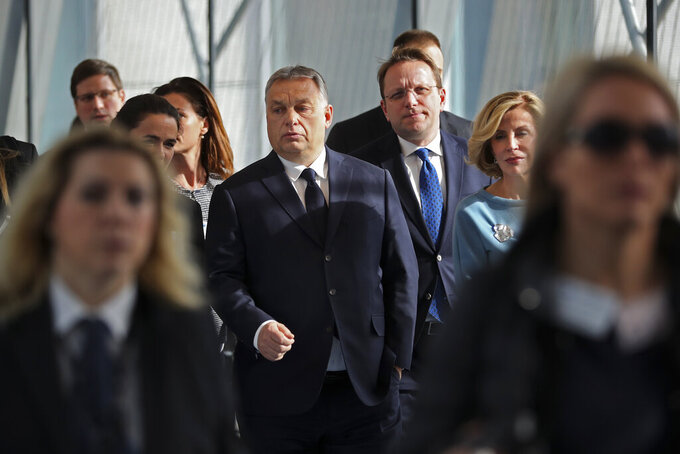 FILE - In this Wednesday, March 20, 2019 file photo, Hungarian Prime Minister Viktor Orban, center, arrives to a European People's Party's meeting at the European Parliament in Brussels. Hungary's governing party pulled out of its conservative group in the European Union's legislature on Wednesday, March 3, 2021, following years of conflict over the rule of law and European values. In a letter Wednesday to Manfred Weber, chairman of the EPP Group in the European Parliament, Hungarian Prime Minister Viktor Orban announced Fidesz's decision to leave the group. (AP Photo/Francisco Seco, File)

BUDAPEST, Hungary (AP) — Hungary’s governing party pulled out of its conservative group in the European Union’s legislature on Wednesday following years of conflict over the rule of law and European values.

The right-wing Fidesz party has held a two-thirds majority in Hungary’s parliament almost uninterrupted since 2010. It left the European People’s Party over the latter’s adoption on Wednesday of new procedures allowing for entire parties to be excluded from the group rather than just individual lawmakers.

Fidesz officials, including Hungary’s prime minister and head of the party, Viktor Orban, had argued that the rule changes were “tailor-made” to sanction Fidesz, and threatened over the weekend to pull out of the EPP if the rules passed.

The EPP backed the rule changes with an overwhelming majority in a 148-28 vote, with four abstentions.

In a letter Wednesday to Manfred Weber, chairman of the EPP Group in the European Parliament, Orban announced Fidesz’s decision to leave the group.

“The amendments to the rules of the EPP Group are clearly a hostile move against Fidesz and our voters ... This is anti-democratic, unjust and unacceptable. Therefore, the governing body of Fidesz has decided to leave the EPP Group immediately,” Orban wrote.

Orban said the rule changes deprived Hungarian voters of their democratic rights and that Fidesz lawmakers would continue to represent Hungary in the European Parliament.

In a statement, the EPP said it “respects and welcomes” the adoption of the new rules allowing for the expulsion of parties, and that a decision on Fidesz’s fate within the party family would be made at a later date.

“Fidesz is now facing an exclusion procedure from the party, under Article 3 of the EPP Statutes. This must be decided by the EPP Political Assembly which will meet when it is safe to do so given the current pandemic situation,” the EPP wrote.

Fidesz’s decision to leave the group could be the final note in a series of longstanding clashes with the EPP, the largest political family in Europe. The group suspended Fidesz’s membership in 2019 over concerns that it was eroding the rule of law in Hungary, engaging in anti-Brussels rhetoric and attacking the EPP leadership.

In a tweet, Hungary’s minister for family affairs and a Fidesz vice-president, Katalin Novak, confirmed Fidesz’s decision to leave the EPP Group.

“We will not let our MEPs be silenced or limited in their capacity to represent our voters. Tackling the pandemic and saving lives remains our number one priority,” Novak wrote.

Even without Fidesz’s 11 lawmakers, the EPP will remain the largest caucus in the European Parliament. It remains unclear whether in addition to pulling its lawmakers from the EPP’s parliamentary group, Fidesz will also quit the EPP party family, led by former Polish Prime Minister Donald Tusk.

Some observers have speculated that Fidesz could seek a new home with the European Conservatives and Reformists (ECR) alongside its ideological ally, Poland’s Law and Justice party, or the far-right Identity and Democracy (ID), of which Matteo Salvini’s Lega is a member.

Austrian EPP member and vice president of the European Parliament, Othmar Karas, tweeted that the group’s decision to enable the sanctioning of member parties was “a clear sign of our ability to act and our credibility.”

“Today’s vote also is rejecting the blackmail attempt by Viktor Orban. Our votes cannot be dictated nor prescribed. This attempt from Orban joins in a long list of inappropriate actions from Fidesz politicians,” Karas wrote.

The news of Fidesz’s departure from the EPP Group was also welcomed by some more liberal European lawmakers. Iratxe Garcia, chairwoman of the center-left Progressive Alliance of Socialists and Democrats (DS) in the European Parliament, said in a statement, “Fidesz should have been kicked out years ago. Instead, the EPP Group sat by and watched while Orban’s anti-democratic government attacked European citizens’ freedoms again and again.”