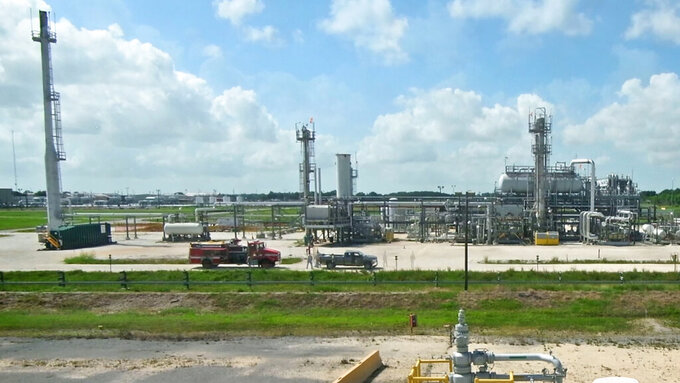 This photo provided by the U.S. Department of Energy shows a section of the Strategic Petroleum Reserve facility in West Hackberry, La. U.S. Energy Secretary Dan Brouillette said Wednesday, Sept. 9, 2020, that Hurricane Laura did significant damage at the site, which holds about 30% of the nation's store of emergency crude oil. (U.S. Department of Energy via AP)

The damaged Strategic Petroleum Reserve site in West Hackberry, Louisiana, holds nearly 8.2 billion gallons (31 billion liters) of crude oil in 21 huge caverns deep underground. Brouillette did not specify the exact nature of the damage or say how much it would cost to fix it, but said he planned to tour it later Wednesday.

More than any worries about damage to the federal repository, “My concern is with the people who work at that site” because so many homes were damaged and destroyed, Brouillette said during a livestreamed news conference with Louisiana Gov. John Bel Edwards.

“Restoring power is our top concern right now,” Edwards said. He noted that 90% of Calcasieu Parish, the most populous parish in the southwest Louisiana area where the storm slammed ashore, remains without power.

Brouillette also said that because the COVID-19 pandemic has reduced demand for oil and gas so much, there is no shortage of gasoline, jet fuel and other refined products, even though two large refineries in the Lake Charles area haven’t been able to reopen since the hurricane.

Citgo and Phillips 66 have large refineries in the area; a third, run by Calcasieu Refining, is much smaller.

Edwards and Brouillette spoke after a closed roundtable discussion with the owners of the large Lake Charles refineries and officials from the Port of Lake Charles, utility companies and three state agencies.

Edwards said that one of those refineries shut down for the second time in 76 years. “But because they shut down the way they did, they did not suffer catastrophic damage,” he said.

Brouillette said some refineries expect to resume operation as soon as power has returned.

“We are still weeks away from total restoration,” Edwards said.

He said the big problem is that Laura damaged or destroyed 1,000 or more power transmission towers. “These are very, very difficult things to replace,” he said.

He said Brouillette signed an emergency order letting Louisiana use some power generated in Texas, “kind of like an extension cord.”

The Strategic Petroleum Reserve was created after the 1973 energy crisis. Two sites in Louisiana and two in Texas currently hold about 27.2 billion gallons (103 billion liters) of crude. The oil is held in caverns hollowed out of salt domes — mountainous salt deposits that are almost entirely underground.

The four sites include a total of 70 such caverns. Together, they can hold nearly 30 billion gallons (113.6 billion liters) of oil.