Ice dancers propel US to 1st Olympic silver in teams 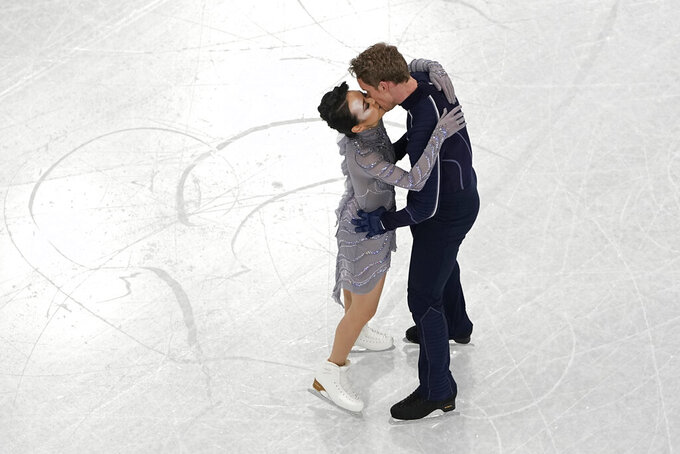 Madison Chock and Evan Bates, of the United States, kiss after completing their routine in the team ice dance program during the figure skating competition at the 2022 Winter Olympics, Monday, Feb. 7, 2022, in Beijing. (AP Photo/Jeff Roberson)

BEIJING (AP) — Madison Chock and ice dance partner Evan Bates knew what they were up against as figure skating's team competition drew to a close at the Beijing Olympics and the American chances of a silver medal started to slip away.

“I had heard the Russians’ (score) right before we skated and I was like ‘Oh, that’s such a hefty score,’” Chock said in a dark hallway inside Capital Indoor Stadium on the third day of the medley event. “And then it was like: ‘All right. Focus.'”

With poise and precision, Chock and Bates proceeded to win the discipline with a score of 129.17, less than a point ahead of the world champion Russians, who had been penalized a point for an overly long lift. That gave Team USA the maximum of 10 points and just about locked up its first silver medal in three editions of the team competition.

That spot on the podium was confirmed a few minutes later, when Karen Chen did what she needed to do in her free skate.

“A silver medal is something we should be incredibly proud of. It’s the highest achievement for our team in this event,” Bates said. “Up until today, we haven’t skated the free dance as well as we could in the season. But it happened today.”

As the U.S. team accepted its medals, missing from the podium was Vincent Zhou, who returned a positive COVID-19 test earlier in the day. The team shot a video message for him during the celebration and wished him well; the men's short program is Tuesday, and Zhou must return a negative test or he will miss the event.

“We basically said: ‘Vincent, we’re sorry to hear the news. We miss you. We wish you were here because you’re a big part of this team. You helped earn the silver medal,’” Bates said.

Performing their avant-garde alien-astronaut love story set to Daft Punk's techno music, Chock — wearing silver makeup and an out-of-this-world hairstyle — and Bates showcased the kind of artistry and emotion that could also land on them on the individual dance podium before the Beijing Games are done.

The Russians easily won the team gold medal, thanks to dominance from history-making Kamila Valieva in the women's discipline and their strong performance in pairs. The U.S. earned the silver after back-to-back bronze medals at the past two Olympics, while Japan climbed onto the team podium for the first time in third place.

It was a roller coaster four days in the team competition for the Americans.

On Friday, fellow ice dancers Madison Hubbell and Zachary Donohue won the rhythm dance with a season-best score. The spectacular Janet Jackson-inspired performance not only gave the Americans maximum points in their discipline but also energized the team, and Nathan Chen followed with a winning performance in his short program.

After a day off Saturday, the program resumed in disappointing fashion: Zhou repeatedly fell during his short program, and Karen Chen also fell on her final triple loop, allowing Japan to close the gap for the silver medal.

The final day didn't start much better, either. Alexa Knierim and Brandon Frazier, whose short program helped the U.S. build a Day 1 lead, struggled throughout their free skate and that allowed Japan to pull even with Team USA.

Then came Chock and Bates, who saved the Americans’ long-sought silver medal, and Chen, who redeemed herself with a free skate that earned the U.S. enough points to climb one step up the podium.

“I’m so happy. I knew that we had a great shot of getting a medal," said Chen, who did not skate for the U.S. when it won team bronze in Pyeongchang, which means she did not take home a medal of her own.

“I didn’t allow myself to think about what color — like, what are the chances with the percentage of gold, silver, bronze or whatnot,” she said. “But I’m just really happy that I did my job and that the team was very happy.”