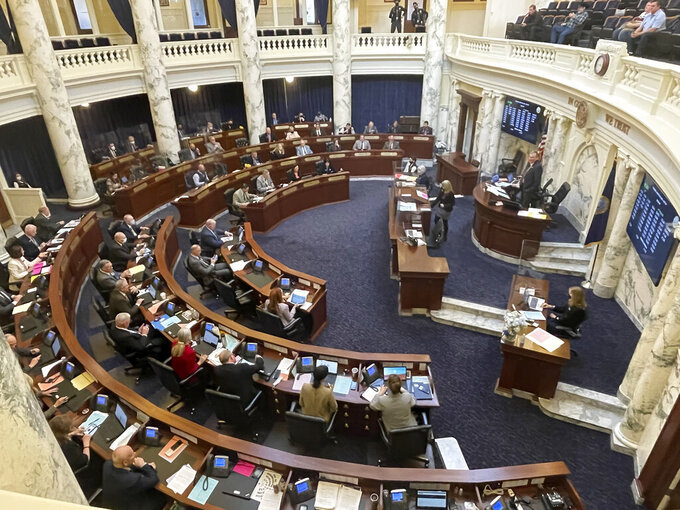 House members meet in the Statehouse, in Boise, Idaho, on Tuesday, March 9, 2021. The House voted to kill a bill that would have made illegal demonstrating at private residences. (AP Photo/Keith Ridler)

BOISE, Idaho (AP) — Legislation to make it illegal to demonstrate at private residences in Idaho was defeated Tuesday in the state House.

The House voted 38-31 to reject the measure that backers said was needed to prevent mobs from intimidating and terrorizing families in their homes. They said demonstrators used the tactic to instill fear and sway officials.

Idaho in the last year has experienced high-profile demonstrations at various officials’ homes spurred by frustration with restrictions on gatherings or mask-wearing mandates related to the pandemic.

Backers also said allowing the demonstrations would deter people from public service or joining police agencies, as at least one officer’s home was targeted. The measure was supported by law enforcement agencies.

Those opposed said the proposed law was an infringement of free speech rights.

Republican Rep. Greg Chaney, an attorney who sponsored the bill, said it was patterned after an Arizona law in effect for about 30 years.

“There are hundreds of places where you can protest,” he told lawmakers during a debate on the House floor that lasted more than an hour. “There's only one where you can be at home.”

Republican Rep. Julianne Young said laws are already in place to protect against violent protestors, and the proposed law went too far.

“We have a right to be secure, but we don’t have a right to always feel secure, or to never have anyone make us uncomfortable because they disagree with us,” she said. “I’m concerned that this bill and its language captures activities that should be protected and should not be violated.”

The bill was co-sponsored by Democratic Rep. Brooke Green, who said protestors targeting homes was a tactic used by far-right and far-left groups.

“There are certain segments of our society, because of whatever social fabric that they adhere to, find it OK to show up in front of our law enforcement families and terrorize them on their doorstep,” she said.

Republican Rep. David Cannon said that without protections, only the “elite” would engage in public service because they could live in walled-off homes, safe from protestors.

“I understand these inconveniences are very trying, uncomfortable," he said. “That’s the cost of liberty. If you can't have a protest on the sidewalk, what's next?”