If games resume, athletes will 'need to know when to peak' 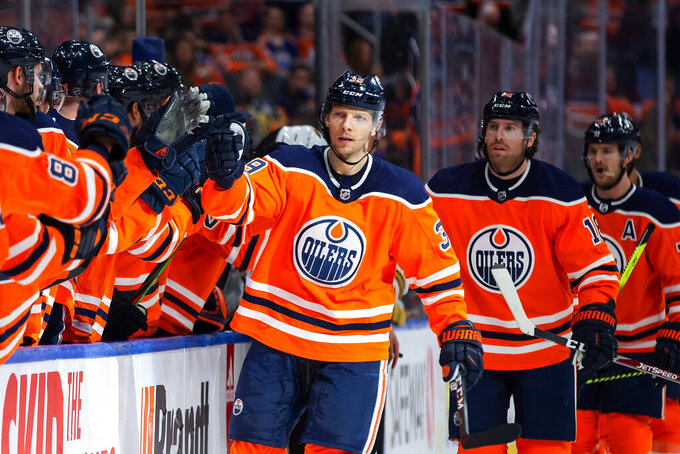 FILE - In this March 9, 2020, file photo, Edmonton Oilers' Alex Chiasson (39) celebrates his goal against the Vegas Golden Knights during the first-period of an NHL hockey game game in Edmonton, Alberta. Making it safe for America's professional sports teams to start playing games is one thing. Making sure athletes are in game shape is another. Experts say nothing should be rushed. Athletes in the NBA, NHL and Major League Baseball all indicate that a few weeks of training is necessary before any games. (Codie McLachlan/The Canadian Press via AP, File)

Making it safe for America’s professional sports teams to start playing games is one thing.

Making sure athletes are in game shape is another.

The coronavirus pandemic brought sports to a halt, but stay-at-home orders are starting to be eased and a handful of NBA teams are opening practice facilities.

For players, the difference between merely working out and playing games will be a significant jump, and experts say things shouldn’t be rushed. With athletes unable to simulate game or even practice activity at home, they will need time before resuming competition.

“Whatever the amount of time is, just know that players will have the input and say so because we’re the ones that’s playing, and that comes first,” said Oklahoma City Thunder guard Chris Paul, president of the National Basketball Players Association. “We don’t ever want to put guys in a situation where their injury risk is high. It varies from player to player. But it’s at least got to be three to four weeks.”

Charlotte Hornets coach James Borrego said players could be at different points based on their access to equipment.

“There’s veterans out there that may have a court in their home, in their facility and they’re probably a little bit more ready to go than others,” he said. “I think we’re talking weeks. This isn’t something where after one week these guys are ready to go.”

NHL Commissioner Gary Bettman has said on multiple occasions he believes a two- to three-week training camp would be needed before the season resumes. Many hockey teams have had trainers send at-home workout routines to players, but few if any have been on the ice in months.

Edmonton Oilers forward Alex Chiasson said it is on the athlete to be ready.

“That’s going to be on us," he said. "We’re professional athletes. We’ve got to make sure we prepare. It’s not easy, but it is what it is, and we’ve got to deal with the situation as best as we can.”

While basketball and hockey were nearing their playoffs, baseball was in spring training when sports were shut down. It created a particular wrinkle for pitchers, who tend to train methodically toward full games.

“When baseball does come back, you have to worry about guys going a very small number of innings," he said. "I don’t know that we’ve come up with a solution to that. ... The public health guidelines makes it tough to do it without a training staff and coaches. Some of the pitchers are throwing into nets in their backyards and hitters are hitting off the tee.”

“The biggest worry is injuries,” he said. "It’s one of those things, I think guys are staying in shape, they’re throwing now. Hopefully a few weeks is enough. I think we’ll have to be smart as the season opens to keep guys fresh.”

Dr. Mike Reinold, senior medical adviser for the Chicago White Sox, said the challenge for pitchers has been how to at least maintain what they gained from their previous spring training progression.

“It will take around three weeks to get a starting pitcher likely ramped up to five innings, but that assumes that they have done the work to maintain themselves and are ready to even start that progression,” he said.

Reinold said preparing is complicated because there is no return date set: “They need to know when to peak."

“That’s a big, important concept when we’re trying to get our athletes ready for a competitive season that they’re building for,” he said. "This is the first time in my career that we’ve ever not had that.”

Pittsburgh Pirates manager Derek Shelton said assessing each player’s condition after the layoff will be a key part of getting things rolling again. He said those conversations are happening even now.

“We don’t need a soft-tissue (injury) because guys were a little bit behind," he said. "That’s why the openness of the player and the conversations we’re having now are so important so we have a baseline coming in.”

“Once it’s safe, we can turn this thing on pretty quickly," he said.

This story has been corrected to show that the Washington Nationals general manager's last name is Mike Rizzo, not Rizzore.