Illinois seeking to surprise No. 14 Wisconsin one more time 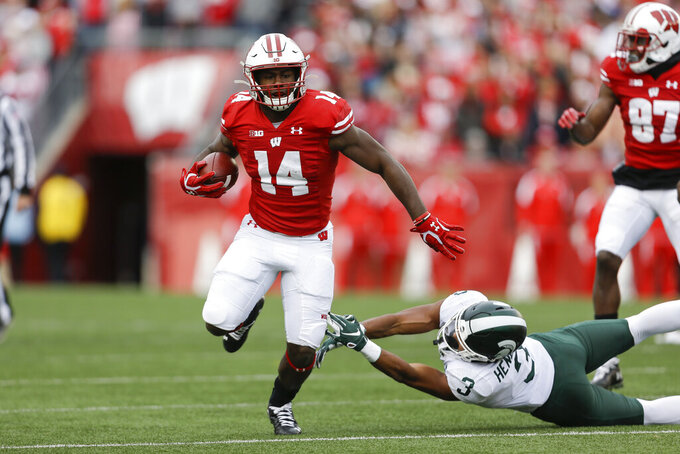 FILE - In this Oct. 12, 2019, file photo, Wisconsin running back Nakia Watson (14) runs past Michigan State safety Xavier Henderson (3) during the first half of an NCAA college football game, in Madison, Wis. Even after beating a Wisconsin team that was favored by 30 ½ points last year, Illinois heads into Madison as a 19 ½-point underdog as the two West Division rivals prepare to open the pandemic-delayed Big Ten season Friday night. “Illinois definitely deserves a butt-whooping from last year,” Wisconsin running back Nakia Watson said earlier this month. (AP Photo/Andy Manis, File)

Illinois believes its upset of Wisconsin last year showed how far the program has come. The oddsmakers are reminding the Illini how far they still have to go.

Even after beating a Wisconsin team that was favored by 30 ½ points last year, Illinois heads into Madison as a 19 ½-point underdog as the two West Division rivals prepare to open the pandemic-delayed Big Ten season Friday night.

Illinois took a big step forward last year in coach Lovie Smith’s fourth season by earning its first bowl bid since 2014, but the Illini are still searching for their first winning season since a 7-6 finish in 2011.

Beating Wisconsin for a second straight year would be a major move in the right direction. The 14th-ranked Badgers want to make sure that doesn’t happen.

Wisconsin’s offense definitely isn’t the same as it was last year.

Yet the Badgers still have enough talent in place to believe they can win the division for a fourth time in five seasons, whereas Illinois is still attempting to move its way up the standings.

Illinois stunned Wisconsin last year by showing the ball-hawking mentality that the Illini have adopted under Smith, a former NFL head coach and longtime NFL defensive assistant. Illinois had a Big Ten-leading 28 takeaways last season, including an interception against Wisconsin that led to James McCourt’s game-winning 39-yard field goal as time expired.

Now they want to take the next step.

“Last year we were a six win-team,” Smith said. “And I think we’re a strong football team right now. We lost a few guys, but for the most part, our best players are back, and we’ve added quite a few players. So we’re excited about seeing exactly how we fit into the landscape in 2020.”

There won’t be any spectators for the first Big Ten game of the season as part of the protocols in place due to the coronavirus pandemic.

STRONG ON THE LINE

Wisconsin must replace three of its starting offensive linemen from last season, but the Badgers return Associated Press preseason All-America second-team tackle Cole Van Lanen. Wisconsin also got a boost from the return of Jon Dietzen, who has made 32 career starts but stepped away from the football program in 2019 due to injuries.

Watson and fifth-year senior Garrett Groshek figure to get the bulk of the carries Friday as Wisconsin attempts to replace Taylor, though sophomore Isaac Guerendo also should have a role.

Illinois will be counting on big contributions from plenty of transfers this season.

Coan’s injury provides a showcase opportunity for Mertz, one of the most hyped recruits in recent Wisconsin history.

When Mertz signed with Wisconsin, it marked the first time since 2007 that the Badgers had signed a 247Sports Composite top-100 recruit who wasn’t an offensive lineman. Mertz went 9 of 10 for 73 yards last season while playing in blowout victories over Central Michigan and Kent State.