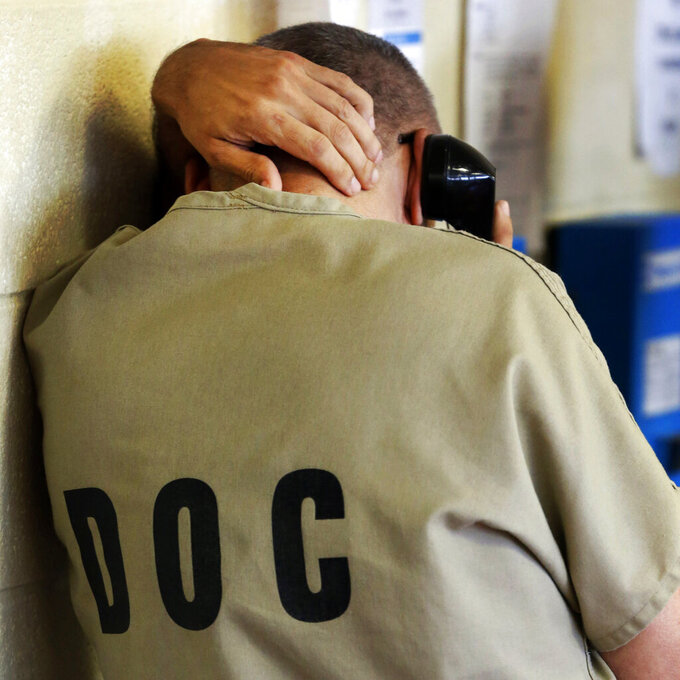 FILE - In this June 26, 2014 file photo, an inmate uses a phone at the Cook County Jail in Chicago. In July 2020, incarcerated people and their families said they are closely watching congressional debates about the next COVID-19 relief bill for proposed legislation that would drastically push down the cost of prison and jail phone calls. (AP Photo/Charles Rex Arbogast)

MINNEAPOLIS (AP) — Incarcerated people and their families said they are closely watching congressional debates about the next COVID-19 relief bill for proposed legislation that would drastically push down the cost of prison and jail phone calls.

For years, they have advocated lowering rates that run as high as $25 for a 15-minute call. Now, they said, with the economic fallout of the coronavirus pandemic, the costs are especially debilitating, separating families at a crucial time.

“It’s hard for guys trying to be husbands, trying to be fathers, trying to do the right thing,” Thomas Gant, who is incarcerated at Wende Correctional Facility in New York, said Tuesday. He said the suspension of most in-person visits at facilities nationwide have made calls back home even more important.

The coronavirus outbreak has put a spotlight on the conditions in America’s prisons and jails, which house more than 2.2 million people, with people of color making up a disproportionate number of those imprisoned. Overcrowding, substandard medical services, and a shortage of masks and disinfectants have made correctional facilities incubators of disease.

People in correctional facilities are 300% more likely to get coronavirus and 500% more likely to succumb to the virus, according to a study by researchers at Johns Hopkins and UCLA published this month in the Journal of the American Medical Association.

Adnan Khan, Executive Director of Restore Justice, is fielding calls from families with relatives inside San Quentin State Prison in California, which has been especially hard hit by the coronavirus in recent weeks and is now in lockdown.

“It’s been heartbreaking. If we do contact tracing for mental health, how much of that would be linked to prisons?” said Khan, who is familiar with that anxiety and stress. He was released from San Quentin last year after serving 16 years.

In May, the U.S. House passed the Martha Wright Phone Justice Act as part of its stimulus bill, which would give the FCC authority to regulate all prison and jail calls, including the 80% that originate and end in the same state also known as instate calls — something currently barred by a 2017 Court of Appeals ruling.

Senate Majority Leader Mitch McConnell and Senate Chair of the Commerce Committee Roger Wicker of Mississippi will be the key decision-makers on whether this legislation makes it into the Senate’s stimulus bill expected this week.

In a letter to the president of the National Association of Regulatory Utility Commissioners on Monday, Federal Communications Commission Chairman Ajit Pai noted that the FCC recently capped rates for interstate calls — those that cross state lines, which the FCC does have authority to regulate — at 21 cents for prepaid calls and 25 cents for collect calls. And last week, the FCC proposed a cut to the rate caps that would bring them down to 14 cents per minute in prisons and 16 cents per minute in jails.

But that will take time to implement, and interstate calls represent only 20% of all calls made from prisons and jails nationally, he wrote, pointing to the clear limitations of the FCC’s authority to address “the burden of egregious rates.”

“I have custody of my son’s two kids,” said Mashonda Jones, whose son is incarcerated in a Virginia county jail. “They went from talking to him every day to talking to him a few times a week. The money just goes so quick.”

This story has been corrected to show that Adnan Khan spent 16 years behind bars.