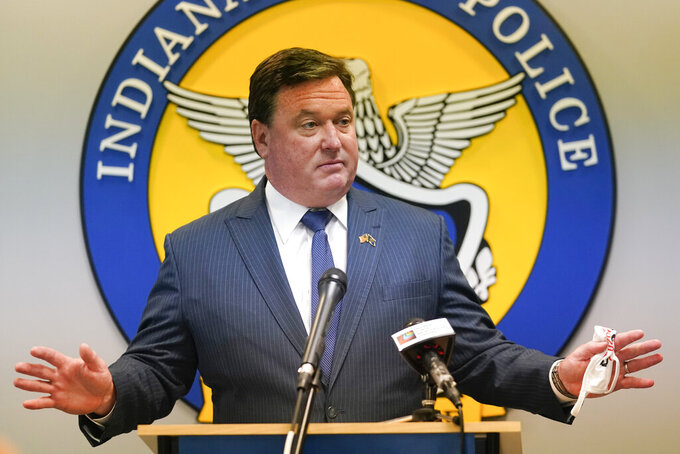 INDIANAPOLIS (AP) — Indiana’s attorney general candidates are divided over how the Republican governor has used the state’s emergency powers law to impose a mask mandate and other coronavirus-related executive orders that have stirred discord among conservative voters.

But it is the Democratic candidate who fully supports Gov. Eric Holcomb’s legal authority while the Republican candidate is emphasizing what he calls the need to curb that power.

Holcomb has faced criticism from some conservatives — including the current Republican Attorney General Curtis Hill — over the 44 executive orders that he has issued since first declaring a statewide public health emergency on March 6.

Some of that pushback has focused on Holcomb’s refusal to use his exclusive power to recall legislators to the Statehouse since their regular 2020 session ended March 11 — just as COVID-19 shutdowns started spreading across the country.

Republican attorney general candidate Todd Rokita calls the coronavirus very contagious and worse than the flu, but says he wants to work with legislators to revise the state emergency law, which was largely drafted in 2003 following the 9/11 terrorist attacks. Rokita said he believed it was meant for temporary situations such as floods, tornadoes or terrorist actions, even though epidemics are included among the 29 situations specified in the law.

“I don’t see in reading it that it’s at all meant for something with the duration as long as this pandemic,” Rokita said.

Rokita is a former congressman and Indiana secretary of state. He won the Republican nomination over Hill after the state Supreme Court suspended Hill’s law license for 30 days; Hill had been accused of groping a s tate lawmaker and three other women during a party.

Holcomb dropped any possible criminal penalties from the statewide mask mandate in July after Hill argued the governor was overstepping his authority and that only the Legislature could take such a step.

Democratic attorney general nominee Jonathan Weinzapfel said he wouldn’t have undercut Holcomb’s mask order and that Rokita isn’t supporting the governor’s mandate by wanting to kick the issue to the Legislature.

Several members of the Republican-dominated Legislature have said they will propose limits on the governor’s emergency authority, such as capping the number of 30-day extensions he can declare without legislative consent.

Weinzapfel, a former Evansville mayor and state representative, said since Indiana’s part-time Legislature only meets a few months a year, the governor must be able to respond in emergencies.

“I would hope they will maintain that authority for the governor,” Weinzapfel said. “I’m sure there are plenty of things that could be changed to make it more reflective of what we’ve experienced over the last few months.”

The discontent over Holcomb’s coronavirus orders has some longtime Republicans saying they will vote for Libertarian gubernatorial candidate Donald Rainwater in November’s election.

Rainwater flatly opposes the mask requirement, while Holcomb's Democratic challenger, Woody Myers, a physician and former state health commissioner, has called for tougher enforcement of the mask mandate and called Holcomb’s easing of precautions in recent weeks “a huge mistake.” Indiana’s rates of COVID-19 deaths and hospitalizations have grown in the past month.

Rokita said he “absolutely” supports Holcomb’s reelection and that leaders across the country faced an unprecedented situation when the pandemic first hit the country.

“The governor was in a very difficult position and led in a way that, by in large, kept the state safe relative to other states,” Rokita said.