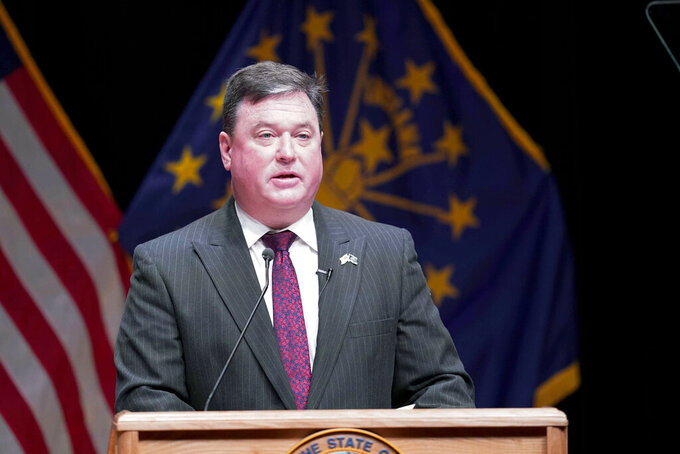 INDIANAPOLIS (AP) — Indiana's attorney general’s office vigorously defended Gov. Eric Holcomb's emergency powers in response to a restaurant's lawsuit challenging his order that masks must be worn inside restaurants to stem the spread of the coronavirus.

That defense of Holcomb's action comes even though Republican Attorney General Todd Rokita, who took office in January, previously called for curbing the governor's authority.

Yergy’s State Road BBQ in Bluffton filed a suit in December against the Wells County Health Department, Holcomb and the state after it was shut down for violating face-covering requirements and capacity limits.

The lawsuit contends the county health order closing the restaurant was based on unconstitutional executive orders issued by the governor and that Holcomb didn't have authority to mandate mask-wearing without backing from the Legislature. The restaurant in the town about 20 miles south of Fort Wayne maintains the order caused “unjust injury to Yergy’s fundamental civil rights, liberty interests and property rights.”

The state attorney general's office, however, argues that based on “broad, clear, and unambiguous language” of the Indiana’s emergency powers law, the General Assembly “intended to grant the executive branch the authority to protect Hoosiers through an emergency declaration."

“Acting well within the limits of the United States and Indiana constitutions and the Indiana Code, the Governor carried out his duties in a reasonable and necessary way to address an unprecedented emergency, affecting not only Indiana and the United States, but also the world," the state’s attorneys wrote in a motion to dismiss the lawsuit filed Monday.

The attorney general's office pointed to a U.S. district judge's ruling in December denying a request from more than 15 Indianapolis bars that wanted to end coronavirus restrictions put in place by Mayor Joe Hogsett.

The bars claimed the orders violated the state and U.S. constitutions, doing irreparable harm to businesses. The court ruled the businesses did not present a legal basis for an injunction on the local health orders and denied the request.

The Republican governor’s use of executive orders that early on shut down many businesses deemed nonessential and now include the statewide mask mandate — first issued in July — have faced complaints from many conservatives across the state and protests that he’s overstepped his authority.

Holcomb has issued nearly 60 coronavirus-related executive orders since last March under the state’s emergency law, which was overhauled in the years after the 9/11 terrorist attacks. Some have suggested steps such as limiting any emergency action by the governor to 30 days without legislative support, arguing it was meant for temporary situations such as floods, tornadoes or terrorist actions, even though epidemics are included among the 29 situations specified in the law.

Despite the lawsuit response from the attorney general's office, Rokita didn't forcefully defend Holcomb's actions during the election campaign. Rokita said he wanted to work with legislators to revise the state emergency law, which he did not believe was meant “for something with the duration as long as this pandemic.”

State lawmakers are now debating bills advanced by the House and Senate that would curb a governor’s authority to impose emergency restrictions such as mask rules and business closures. The differing proposals would set up ways to either force the governor to call lawmakers into a special session during a long-lasting emergency or give legislative leaders new authority to take such action.

Holcomb and others have questioned whether the proposals written by Republican lawmakers are allowed under the state constitution.

A half dozen top Holcomb staffers further defended his executive actions last week, testifying to a state Senate committee that the governor’s capacity to quickly address emergencies has been critical to the state’s coronavirus response. Limitations to those powers, they said, could hinder the state’s current progress and delay urgent reactions to future public health emergencies or natural disasters.