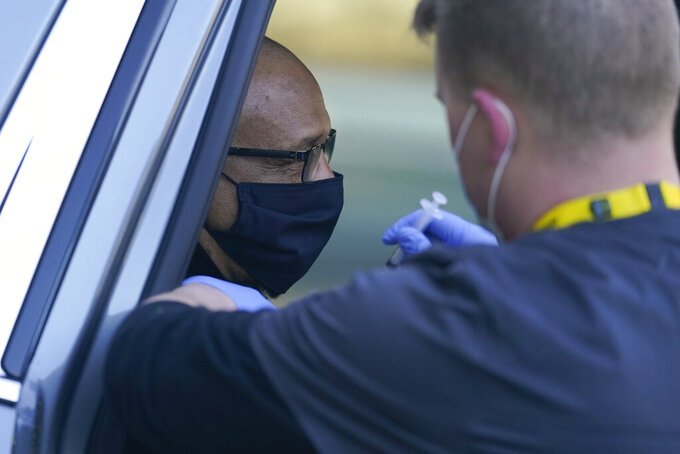 INDIANAPOLIS (AP) — Indiana lawmakers on Wednesday advanced legislation that would make it easier to overturn local health orders or enforcement actions amid ongoing complaints from conservatives about Republican Gov. Eric Holcomb’s statewide response to the coronavirus.

Holcomb responded with concern about the bill's progress and said he also expects to veto a separate measure approved by lawmakers on Monday that would curb the governor’s authority under the state emergency powers law.

The Senate bill creates a process allowing the public to appeal local health orders to county or city elected board. Such orders could include citations, fines or an order to close a business. The enforcement action would be halted during an appeal, which could allow a business to stay open until the matter is heard by a city or county board, even if it is not following health orders.

Currently, the only option is to file a lawsuit. The appeals process would apply only to health orders enacted during a declared emergency.

Language added to the proposal by House lawmakers requires that any local emergency health order that is more stringent than state orders must first be approved by local elected officials, like city council members or county commissioners.

The bill also makes it easier for local elected officials to remove health officers, including for “good cause” alone.

The amended measure was approved by the House rules committee Wednesday and now heads to the full chamber for consideration.

Bill author Republican Sen. Chris Garten, of Charlestown, said the legislation isn’t meant to be a combative response against local health officials, but rather a “check and balance” that protects the rights of business owners and ensures economic health.

Democrats have argued that the plan gives politicians too much control over major public health decisions and puts public health in jeopardy. Rep. Matt Pierce, a Democrat from Bloomington, emphasized that the enforcement appeals are likely to be influenced by partisan politics and “won’t be about the science.”

More than 60 executive orders issued by Holcomb since Indiana’s first confirmed COVID-19 case was announced last March have stirred some conservative opposition and prompted debate in the GOP-dominated Legislature on measures limiting the governor’s authority to impose emergency restrictions.

Holcomb announced last week that he would lift the statewide mask mandate and remaining COVID-19 business restrictions on April 6. He pointed to the ability of local officials to impose tougher restrictions in response to COVID-19 cases in their communities as a justification for the step.

The governor said Wednesday that makes the implications of the legislation on local units “concerning” and noted that he would “take a hard look” at the language of the bill.

He added that he has concerns with “multiple" other bills moving through the Legislature, including a proposal to limit a governor’s authority to impose long-lasting emergency restrictions, such as mask rules and business closures.

The House bill would also establish a new process for the General Assembly to call itself into a 40-day emergency session to consider legislative action in response to a gubernatorial declaration of a statewide emergency, a change to state law which Holcomb and some legal experts have maintained is beyond the Legislature's control to make.

“I cannot skirt my duty and do something that I believe is unconstitutional. ... It's v-e-t-o," Holcomb said Wednesday. “All these bills that have anything to do with how we manage our way through this thorny period in our state’s history concern me.”

Lawmakers could give final approval to the governor's power bill as early as Thursday. Holcomb would have seven days to sign or veto it — or it would then become law without his signature. That could give the Legislature time to override a potential veto by a simple majority of both houses before the current session ends in late April.

The House committee additionally amended and approved a separate bill Wednesday that would designate religious activities as essential services and prohibit any restrictions on them during a declared emergency, including in-person services.