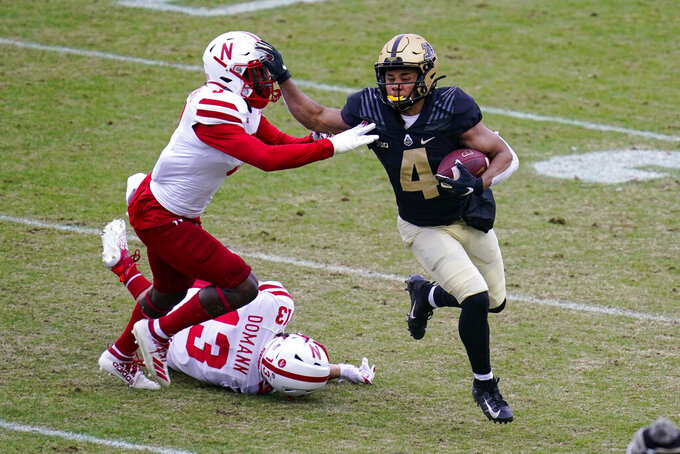 Two of the seven Big Ten Champions Week games were canceled Tuesday because of COVID-19 outbreaks as an uncertain postseason looms for college football.

The annual rivalry game between Indiana and Purdue set for Friday was canceled for the second time in two weeks and the third time this season. Michigan's game at No. 18 Iowa on Saturday also was canceled, the third straight Wolverines game to be called off.

Athletic directors Scott Dolson of Indiana and Mike Bobinski of Purdue acknowledged the history and tradition of playing for the Old Oaken Bucket.

“Both universities worked extremely hard in an effort to play,” they said, "but at this time it just isn’t possible.”

The final month of the season, including bowl games, is already being affected by the pandemic, just as the regular season was. Approximately 125 games since late August have been postponed or canceled, including the Frisco Bowl scheduled for Saturday. SMU had to withdraw from the game about 25 miles from its Dallas campus and its opponent, UTSA, is switching to the First Responders Bowl Dec. 26 against a team to be determined.

In Indiana, the cancellation came just as the Boilermakers (2-4) appeared ready to resume football activities after pausing them a week ago on the same day Indiana took the same step.

It’s unclear whether the cancellation will end a bizarre year which began with Purdue coach Jeff Brohm missing the season opener after testing positive for COVID-19.

“We’re not looking down that road,” Brohm said Monday when asked whether Purdue might be interested in playing in a bowl since there is no minimum number of wins needed this season.

The cancellation was a disappointing blow to the Hoosiers (6-1), who are having one of their best seasons in decades. The Hoosiers haven’t won a bowl game since 1991 and coach Tom Allen believes that would be a good way to wrap up a historic season.

Michigan had its Dec. 5 home game against Maryland and its visit to No. 3 Ohio State last week wiped out because of an ongoing outbreak. Athletic director Warde Manuel said there would have been more than 50 players unavailable because of positive tests and contact tracing requirements — more than last week or the week before.

“I am very proud of the way that our players worked to try and get back onto the field but the numbers simply don’t support us taking the field on Saturday," Manuel said. "This has been a very challenging and difficult 2020 for everyone and we want to make sure we are doing what is right for our student-athletes at every step along the way, and that ultimately is ensuring their health, safety and welfare.”