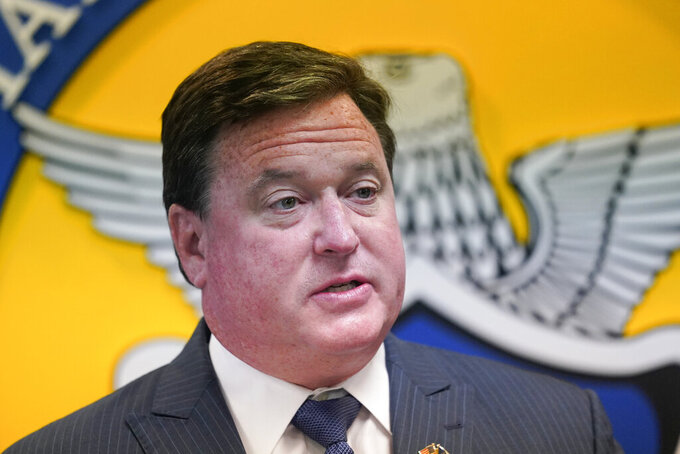 INDIANAPOLIS (AP) — Indiana Democrats are targeting the state attorney general’s race as their best chance to break the stranglehold Republicans have over state government.

Democratic candidate Jonathan Weinzapfel, a former Evansville mayor, says he wants to tone down partisanship in the office of state government’s top lawyer.

Rokita counters as an unabashed President Donald Trump supporter with an aggressive law-and-order and anti-abortion agenda that will continue Hill’s tactics of joining Republican lawsuits against what they regard as federal overreach, such as the Affordable Care Act, or “Obamacare.”

Weinzapfel said he saw no difference between Rokita and Hill over what he called “gross politicization of the office.”

Republican Gov. Eric Holcomb faced opposition from Hill on policies such as the governor’s support of needle-exchange programs for intravenous drug users long before Holcomb called for Hill’s resignation when the groping allegations became public in 2018.

Rokita has foreshadowed possible similar splits by not defending Holcomb against conservative critics of the executive orders he’s issued during the coronavirus pandemic, including restrictions on personal movement, forcing some businesses to close and a statewide mask mandate.

With Holcomb holding big fundraising and organization advantages for his reelection campaign, Weinzapfel points to his bipartisan work leading Indiana’s third-largest city in 2004-12 as a sign that he wouldn’t focus on stirring political conflicts.

Rokita won statewide elections as secretary of state in 2002 and 2006 before he held a central Indiana congressional seat for eight years. He’s trying to make a political comeback after he lost a 2018 bid for the Republican U.S. Senate nomination to Mike Braun and unsuccessfully sought the party’s 2016 nomination for governor after then-Gov. Mike Pence became Trump’s vice presidential running mate.

Rokita has faced several controversies, including allegations that his congressional staffers often felt obligated to do political work to help his campaigns. And a 2018 Associated Press analysis of state and congressional spending records revealed that Rokita had spent more than $3 million in public money on advertising campaigns that often coincided with his bids for office.

Statewide police organizations are backing Rokita, who opposes steps backed by Weinzapfel, such as eliminating criminal penalties for possessing small amounts of marijuana.

Rokita said he supports evaluations of how to improve police training but does not share the racial injustice concerns that Holcomb discussed during an August speech, when the governor described racism as a “virus that’s equally voracious” as the coronavirus outbreak for the state and nation.

Spring protests over the death of George Floyd in Minnesota turned violent in Indianapolis and left behind widespread damage to downtown businesses, while smaller protest marches occurred in several communities across the state.

“To say that there is systemic racism because people are out on the street marching ... absolutely not,” Rokita said. “I don’t base my conclusions because there’s lawlessness in the street.”

Rokita said a priority would be fighting to limit federal government regulations and pursuing court challenges, such as the Obamacare lawsuit.

“That has been a lifelong work for me, so that will absolutely continue,” Rokita said. “Perhaps, given this office, with more ability for success than I’ve had in Congress, for example. I’m absolutely looking forward to that and doing everything I can to help President Trump do the same thing.”

Weinzapfel is trying to break the streak of Democratic defeats in statewide races that stretches back to the 2012 election. Republicans also hold commanding majorities in the Legislature, giving Democrats little influence in state government.

Labor unions and national Democratic groups have given hundreds of thousands toward Weinzapfel’s campaign, which they have not done for the underfunded campaign of Democratic governor candidate Woody Myers.

Rokita only launched his campaign in May but has been boosted by a network of donors from his nearly two decades of political runs. He’s also collected at least some $800,000 from the Republican Attorneys General Association, the Washington-based group that largely funded Hill’s 2016 campaign.

Weinzapfel professes optimism that he can break through.

“Indiana can and should be competitive,” he said. “I think the pendulum has swung way to the right for a long time and it’s time for that to swing back.”