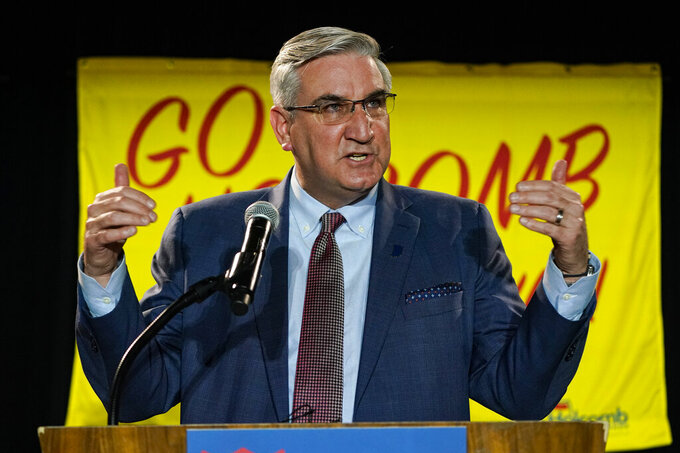 INDIANAPOLIS (AP) — Republicans won continued control of the Indiana governor’s office and kept the state in the GOP’s presidential column as voters cast the final ballots Tuesday, with Democrats falling short in other races they targeted in hopes of clawing back to political relevance in the state.

Gov. Eric Holcomb and President Donald Trump both won victories in the state for Republicans, along with the state attorney general's race where Democrats had made a major push. A central Indiana congressional seat that Democrats hoped to win after decades as a GOP bastion was undecided Tuesday night.

A record number of more than 1.7 million voters cast ballots ahead of Election Day as coronavirus health concerns prompted more use of mail-in ballots and early voting sites.

Holcomb won a second four-year term as governor, easily fending off challengers who criticized his handling of the coronavirus pandemic.

Holcomb went into his campaign for a second term with a huge fundraising advantage and didn’t face any well-known challengers. Holcomb sidestepped any criticism of Trump even as Holcomb promoted face mask use and issued a statewide mask mandate in July.

Holcomb choked up during his victory speech while thanking his family.

“I am flat-out eager to continue to get ’er done with you over the next four like we’ve done over the last four," Holcomb said.

Myers said in his concession speech that he still believed Indiana “could do more for those who have so little and those who need so much.”

“About two years ago when this journey began, I knew it was a long shot and that the battle was entirely uphill,” Myers said.

LINES AND LOTS OF COUNTING

Voters faced long lines at some polling sites across Indiana and election officials said they might need to wait a while to find out results.

Some voters in central Indiana’s Madison County waited in line up to five hours to cast their ballots Tuesday, with long lines remaining after polling sites were scheduled to close at 6 p.m. The county is part of the hotly contested 5th Congressional District.

“We’ve had unprecedented voter turnout, but things haven’t gone exactly as we wanted them to today,” said Russ Willis, chairman of the Madison County Republican Party and president of the county election board.

The county clerk’s office in Indianapolis said Tuesday evening that it had processed about one-quarter of its some 210,000 early votes and that it will likely take the rest of the week before all are counted.

Indiana Democratic Party Chairman John Zody said the record number of mail-in ballots around the state means people might need to be patient while waiting for election results.

“That is perfectly reasonable given the circumstances,” Zody said. “I’m willing to experience a little bit of a delay here if that means all the votes are going to be counted in the right way.”

The home state of Vice President Mike Pence wasn’t in much doubt as Democrat Joe Biden’s campaign paid little attention to the state that has gone for Republican candidates in 12 of the last 13 presidential elections.

Trump won Indiana by 19 percentage points in 2016 over Hillary Clinton. Republicans admitted his popularity had eroded in some areas, contributing to a contentious campaign for a longtime GOP-controlled congressional district in suburban Indianapolis that Democrats were trying to capture.

Rokita’s campaign announced Tuesday he had tested positive for COVID-19 after developing “some symptoms” but was doing well.

Rokita lost the 2018 Republican U.S. Senate primary but started a politcal comeback by defeating current Attorney General Curtis Hill for the GOP nomination after Hill was tarnished by allegations that he drunkenly groped four women during a party.

Rokita cast himself as an unabashed President Donald Trump supporter with an aggressive law-and-order and anti-abortion agenda that will continue Hill’s tactics of joining Republican lawsuits against what they regard as federal overreach, such as the Affordable Care Act, or “Obamacare.”

At least $15 million was sunk into the race, with national party organizations and dark-money groups spending heavily for the district centered on the northern suburbs of Indianapolis that Republicans have controlled for more than five decades.

Spartz won a crowded Republican primary race that largely turned into a contest of loyalty to Trump. But she afterward shifted away from talking about Trump during the general election campaign.

The top Republican in the Indiana House survived a hotly contested campaign to keep his legislative seat.

Indiana House Speaker Todd Huston’s district in the northern Indianapolis suburbs was among a cluster of legislative seats targeted by Democrats as they tried to paint the Republican incumbents as fallen out of step with voters.

Huston was facing voters for the first time since taking over the top legislative position in March from longtime Speaker Brian Bosma.

Huston outspent Democratic challenger Aimee Rivera Cole by at least 5-to-1 in the Fishers district as more than $1.5 million was poured into Huston’s campaign from mostly Republican organizations and business lobbying groups seeking to keep him in the Legislature.

Republicans were likely to retain strong majorities in both the Indiana House and Senate, but Democrats were trying to break the two-thirds GOP supermajority in the House that gives them total control over legislative action.