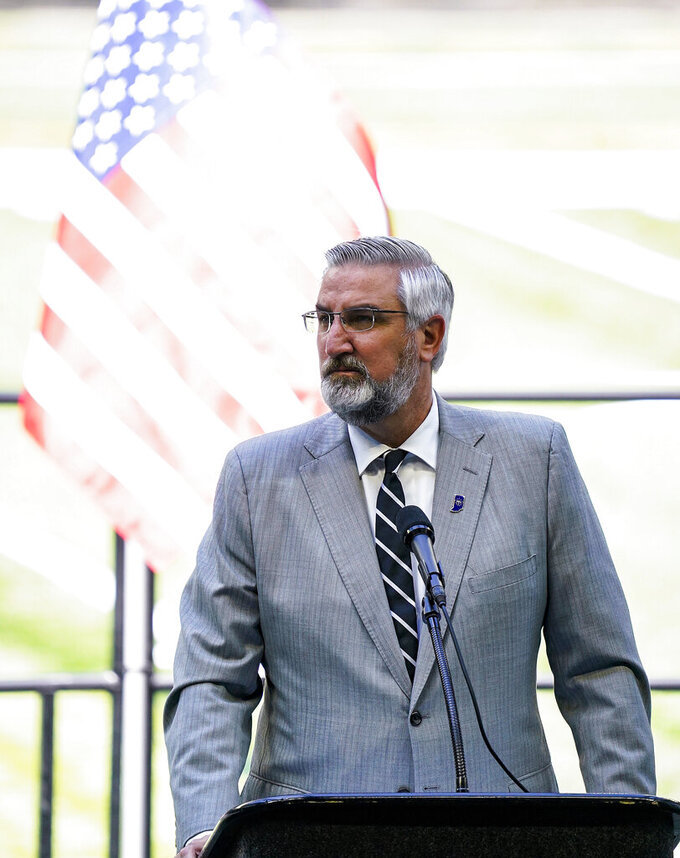 Indiana Gov. Eric Holcomb speaks to members from the Sikh community during a gathering to honor the lives lost by the FedEx facility mass shooting last month, Saturday, May 1, 2021, at Lucas Oil Stadium in downtown Indianapolis. (Grace Hollars /The Indianapolis Star via AP)

INDIANAPOLIS (AP) — Indiana University modified its COVID-19 vaccination requirement on Tuesday, making it optional that students and employees provide proof of getting the shots as school officials changed a policy that had drawn protests from many state officials.

IU said that under the revised requirement students and employees would be able to attest to their vaccination without having to provide immunization documentation as was required under the previous policy announced May 21.

The university also said a form would be available Wednesday for those requesting exemptions from the vaccine requirement for medical or religious reasons.

“Requiring the COVID-19 vaccine for IU students, faculty and staff with appropriate exemptions continues the university’s comprehensive science and public health-driven approach to managing and mitigating the pandemic on our campuses,” IU President Michael McRobbie said in a statement. “Throughout the pandemic our paramount concern has been ensuring the health and safety of the IU community. This requirement will make a ‘return to normal’ a reality for the fall semester.”

The changes come after the state attorney general issued last week a non-binding opinion that the policy was illegal under a new state law banning the state or local governments from requiring vaccine passports. The university had said vaccinations would be required before fall semester in order for students to attend classes and employees to keep their jobs.

Republican Gov. Eric Holcomb had said he wouldn’t block IU’s requirement despite a letter from 19 Republican Indiana House members asking him to prohibit any state university from mandating vaccines that don’t have full U.S. Food and Drug Administration approval.

“I think this will work its way out and there’s more than one way to skin a cat,” Holcomb told WTHR-TV on Sunday. “The conversations are ongoing right now. But I don’t plan on doing an executive order.”

IU said it considered responses from students, parents, faculty, staff members and state officials in making the changes to the vaccine verification policy for its some 90,000 students on seven campuses around the state.

University spokesman Chuck Carney said officials had discussed the policy “with the governor’s office and legislators up to this point and will continue to do so. That would be standard practice for us with such a significant policy decision.”

Nearly all Republican members of the Indiana Senate sent a letter to McRobbie last week calling IU’s policy a “heavy-handed mandate goes against many of the liberties on which our founders built our democratic republic.”

It distinguished between Indiana University’s policy and that of Purdue University, which plans to require students and employees to either provide proof of vaccination for the fall semester or participate in frequent COVID-19 testing.

The attorney general’s office didn’t immediately reply to a request for comment Tuesday on whether it believed the IU changes would put its policy in compliance with state law.

No vaccine requirements have been implements for Ball State, Indiana State or Southern Indiana universities or Ivy Tech Community College.

“Luckily, Gov. Eric Holcomb is using common sense by stopping his extreme partisan colleagues in the Indiana General Assembly and the attorney general’s office from blocking such protections from taking place,” a party statement said.