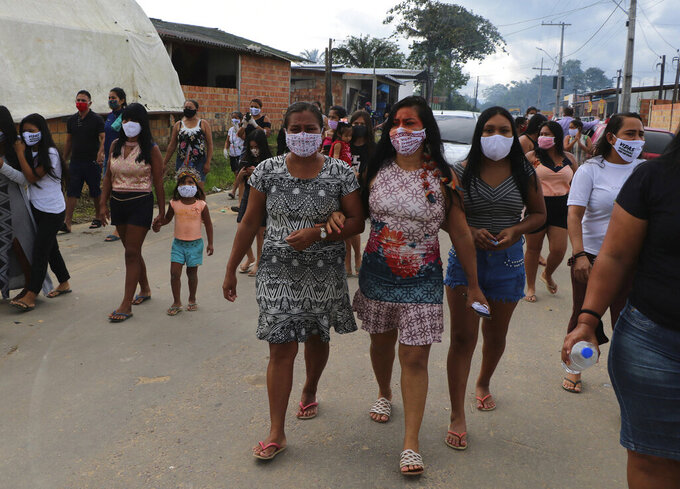 Locals walk after the funeral of Chief Messias Martins Moreira, 53, of the Kokama ethnic group, who died of Covid-19, at Parque das Tribos in Manaus, Amazonas state, Brazil, Thursday, May 14, 2020. (AP Photo/Edmar Barros)

SAO PAULO (AP) — As COVID-19 reached remote indigenous lands in Brazil’s Amazon, the government agency responsible for protecting native people brushed off calls for action, focusing instead on waging ideological battles, according to agents from the institution itself and others.

Brazilian President Jair Bolsonaro’s repeated promotion of developing the vast Amazon has for months prompted indigenous activists, celebrities and agents on the ground to sound the alarm. In the face of a spreading pandemic, they warn inaction is enough to wipe out many indigenous people.

The Associated Press spoke to four agents who work with indigenous peoples in the farthest reaches of Brazil’s Amazon, and they were unanimous in their conclusion: The national Indian foundation, known as FUNAI, is hardly doing anything to coordinate a response to a crisis that could decimate ethnic groups.

There’s not enough protective equipment for agents who enter indigenous territories or meet with native people in cities. Necessities like kerosene and gasoline are in short supply. Food deliveries only began last week — a month after indigenous people were instructed to remain in their villages — and remain vastly insufficient.

Since the pandemic’s onset, there has been fear about the vulnerability of native people who live far from urban health facilities and whose communal lifestyles render them susceptible to swift transmission.

At least 88 indigenous people have already died of COVID-19 in the Amazon, according to a tally by the Brazilian indigenous organization APIB that includes health ministry figures and information from local leaders. The count is likely higher, because hospitals often don’t use patients' indigenous names when admitting them.

As native people started succumbing to the coronavirus, FUNAI’s focus was elsewhere, according to Antônio Carlos Bigonha, who heads the public prosecution office responsible for indigenous affairs. He said the Indian agency's response has been “delinquent, lax, insufficient,” reflective of Bolsonaro’s open support of assimilation.

“The environment of COVID-19 is so grave, because integration alone is bad, but in the context of a pandemic is genocide,” Bigonha said in a telephone interview.

CIMI, a Catholic group that defends indigenous rights, condemned FUNAI's policies for failing to safeguard native peoples. FUNAI fired back, attacking what it called “socialist public policies” implemented since 2003 by the leftist Workers’ Party that it maintained made indigenous people dependent on welfare.

“This isn’t ... a socialist plot,” said Bigonha. “It’s just an interpretation of historical facts: We adopted integrationist policy at the start of the 20th century and it almost did away with the indigenous people.”

FUNAI’s response was swift: It returned photographs Salgado had taken of the Korubo people in the isolated Javari Valley, near the Peruvian border, along with a statement recommending Salgado auction them to buy food, personal hygiene products and cleaning goods for indigenous people.

FUNAI told the AP in an e-mailed response that it adopted “all the measures within its reach" in the fight against the pandemic. It said it has distributed 45,000 food kits and more than 200,000 personal protection items nationwide, without breaking it down by region, and that another 40,000 food kits were coming soon.

Agents on the ground, including three employed by FUNAI, told a different story. They spoke to the AP on condition of anonymity for fears of retribution after several officials in the Bolsonaro administration were fired or reassigned after talking to reporters.

There’s no leadership from above and requests sent to FUNAI headquarters in Brasilia go unanswered for weeks, they said.

The Upper Solimoes region near Brazil’s border with Colombia has one of Brazil’s highest COVID-19 mortality rates. The only hospital with ventilators, a military facility in Tabatinga, on the border, has only 13 of the lung machines, the health ministry said.

To contain the virus, since mid-March FUNAI agents have told indigenous groups they should prevent anyone from entering their territories and block roads and rivers near their communities.

But as long as there aren't enough food kits delivered, the tribes won't stay on their lands, the agents said. Little agriculture is possible when rivers flood the Upper Solimoes and Upper Negro regions, and the vast majority sell or trade what they fish and hunt.

In the Upper Solimoes, home to some 76,000 indigenous people, only six of the 350 ethnic groups received 1,300 food kits through last week, according to an agent involved in the operation. That has further damaged FUNAI’s credibility, the agent said.

FUNAI’s Rio Negro regional coordinator, Auri de Oliveira, said the chief problem wasn’t shortage of food, but indigenous people traveling to nearby cities to receive emergency coronavirus cash aid from the government. He said the food kit delays were due to “normal bureaucracy” and they have started arriving.

“The food kits will help maintain indigenous people in the villages,” he wrote in a text message. “We will see if they come to town again, because there will be a new cycle of welfare payments.”

While some food aid is arriving it's not enough: One tribal leader in the Upper Solimoes region said by phone Friday his village received food kits for only 90 of its more than 700 families.

Brazil's health ministry said in a statement that the hard-hit cities of Tabatinga and São Gabriel da Cachoeira received some help on Monday. A hospital in Tabatinga got another 10 ventilators and 15,000 masks, among other items. Another unit in Sao Gabriel da Cachoeira received eight ventilators and 11 health-care professionals are coming from Brasilia.

Brazil's shortcomings in fighting the pandemic in the Amazon are worrying its neighbors. Colombian President Ivan Duque deployed the military to its border with Brazil after a surge of COVID-19 cases. About 8,000 indigenous people live near the Colombian border town of Leticia, where cases have shot up in recent weeks.

Peru sealed its border with Brazil in March. On the Brazilian side, one agent reported the coronavirus has reached the Javari Valley, the remote region featured in the photographs FUNAI returned to Salgado, showing the Korubo people posing with spears, canoeing on a river and carrying a slain tapir through the jungle.

The Javari Valley is home to the biggest concentration of isolated indigenous peoples in the world, including 10 groups, according to FUNAI. Hospitals near Javari’s isolated tribes are overcrowded, said one FUNAI agent, who offered a stark warning: If the virus hits harder, collapse will be quick.