Injury-plagued 49ers playing hard to finish off down season 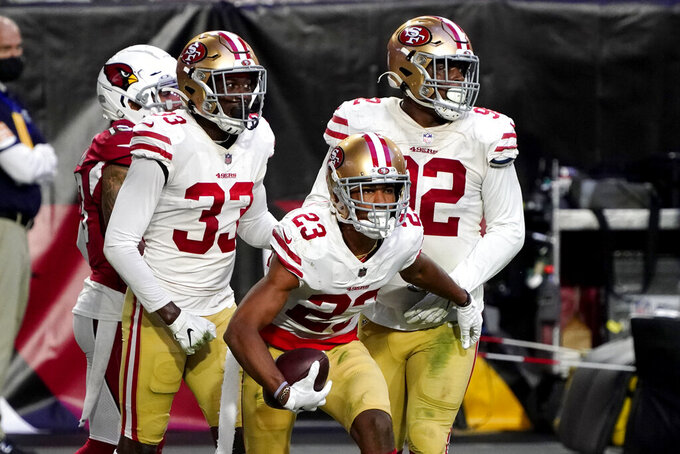 San Francisco 49ers cornerback Ahkello Witherspoon (23) celebrates his interception against the Arizona Cardinals during the second half of an NFL football game, Saturday, Dec. 26, 2020, in Glendale, Ariz. (AP Photo/Rick Scuteri)

The chance to match the success from last season’s Super Bowl run had passed for the San Francisco 49ers.

A spate of injuries, a forced midseason move because of the coronavirus and sloppy play prevented the Niners from having any chance of getting to the playoffs.

The disappointment could have led the 49ers to pack it in and hope for better luck next season, but the tenacity that helped them succeed last season is still there this year.

That was evident when San Francisco dealt a blow to Arizona’s playoff hopes with a 20-12 victory over the Cardinals on Saturday.

“That’s why I’ve been real proud of the players and the way they’ve handled themselves,” coach Kyle Shanahan said Monday. “That’s why I’m truly not going to count this year as a negative. It wasn’t fun. It’s not what we or our fans wanted. But I believe the way we went through it, if you go through things the right way, I think it hardens you and makes you stronger and makes you better. I feel like from an individual standpoint, I feel like that’s how almost everyone in the building did that. When you do that individually, it makes your building a lot stronger."

Third-string quarterback C.J. Beathard personified that for the 49ers (6-9). One year after his brother was murdered outside a bar in Nashville, Beathard made his first start since 2018 and delivered an efficient performance.

He completed 13 of 22 passes for 182 yards and three touchdowns, but most importantly protected the ball after San Francisco committed at least two turnovers in eight straight games.

Beathard lost one fumble on a strip sack but didn’t throw an interception, allowing the Niners defense to win the game. That gave Beathard just his second win in 11 career starts.

“I’ve always been so inspired by C.J,” fullback Kyle Juszczyk said. “This guy just grinds regardless of what’s happened to him or the circumstances. I felt he was unfairly judged earlier in his career with the roster we had. ... The guy inspires us so much and we’re so happy to go perform for him. A lot of guys could have bowed out tonight and we didn’t have to do what we did for him.”

Fred Warner-led defense. Warner was selected to his first Pro Bowl last week and showed why in this game. He had 14 tackles, three passes defensed, two quarterback hurries, a forced fumble and a fumble recovery. The Niners managed to hold the Cardinals to 12 points and 4.4 yards per play.

Pass blocking. The Niners allowed three more sacks, giving them nine the past three games and 36 for the season. Right tackle Mike McGlinchey struggled once again, allowing a pressure that led to the first sack and then getting beat for another late in the first half that led to a strip sack by Haason Reddick.

Jeff Wilson Jr. With Raheem Mostert out for the season, Wilson delivered a career-best performance. He ran 22 times for 183 yards and also caught a 21-yard TD pass. The 204 yards from scrimmage were the most in a game for a 49ers running back since Frank Gore had 246 against Seattle on Sept. 20, 2009.

Robbie Gould. The usually reliable kicker missed an extra point and two field goals that nearly cost the Niners the win. Gould had missed only two field goals and one extra point all season before this game. It was bad timing for a bad game for Gould with the Niners facing a deadline this week to exercise an option on the final two years of Gould’s contract.

“You’ve got to look at the body of work,” Shanahan said. “Robbie’s been unbelievable since he’s been here with us.”

3. Beathard became the third Niners quarterback to throw for at least three TDs in a game this season, joining Jimmy Garoppolo and Nick Mullens. That had happened only five times since the merger with Dallas the previous team to do it in 2015.

The Niners play their season finale at their temporary home in Arizona on Sunday against Seattle.