Inside one network cashing in on vaccine disinformation 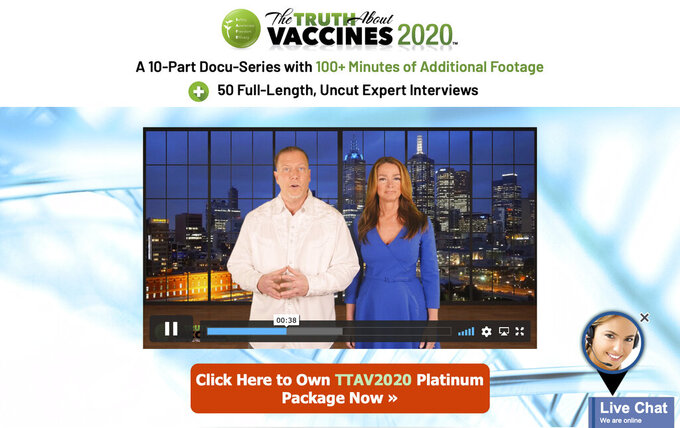 This Wednesday, May 12, 2021 image shows a website featuring Ty and Charleen Bollinger advertising their video series, "The Truth About Vaccines 2020." The Bollingers are part of an ecosystem of for-profit companies, nonprofit groups, YouTube channels and other social media accounts that stoke fear and distrust of COVID-19 vaccines, resorting to what medical experts say is often misleading and false information. (AP Photo)

The couple in the website videos could be hawking any number of products.

“You’re going to love owning the platinum package,” Charlene Bollinger says, as a picture of a DVD set and other products flashes on screen. Her husband, Ty, promises a “director’s cut edition.”

Click the orange button, his wife says, “to join in the fight for health freedom” — or more specifically, to pay $199 to $499 for the Bollingers’ video series, “The Truth About Vaccines 2020.”

The Bollingers are part of an ecosystem of for-profit companies, nonprofit groups and social media accounts that stoke fear and distrust of COVID-19 vaccines, using what medical experts say is often misleading and false information.

An investigation by The Associated Press has found that the couple works closely with others prominent in the anti-vaccine movement — including Robert F. Kennedy Jr. and his Children’s Health Defense — to drive sales through affiliate marketing relationships.

According to the Bollingers, there's big money involved. They have said that they have sold tens of millions of dollars of products and paid out $12 million to affiliates.

“This is a disinformation industry,” said Dorit Reiss, a professor at the University of California Hastings College of the Law, who specializes in vaccine policy.

The Bollingers were already in the business of selling vaccine disinformation before COVID-19 hit. But the pandemic presented them and others a huge opportunity to expand.

The Bollingers aligned themselves with right-wing supporters of former President Donald Trump — establishing a Super PAC to push what they call “medical freedom,” participating in the insurrection at the U.S. Capitol and promoting lies like the assertion that the election was stolen from Trump.

On the afternoon of Jan. 6, as supporters of former President Donald Trump stormed the U.S. Capitol, the Bollingers held a rally just blocks away. As emergency vehicles screamed past, Charlene Bollinger celebrated from the stage, calling it an “amazing day.” Meanwhile, Ty Bollinger stood at the doors of the Capitol, though he says he did not enter.

The Tennessee couple’s social media accounts have been identified as among the top vaccine misinformation super spreaders by organizations such as NewsGuard and The Center for Countering Digital Hate. They have more than 1 million followers on Facebook, and Charlene Bollinger has said their email list has “a couple million” people on it.

Ty Bollinger began their business several years ago with books and DVDs such as “The Truth About Cancer,” which medical experts say included unproven information about alternatives to chemotherapy. He describes himself as a “medical researcher” but the AP could find no indication he has any scientific training.

In 2017, the business expanded into vaccines. When coronavirus hit, it pivoted again, selling false or baseless information about COVID-19.

Their false and unsubstantiated claims include linking 5G wireless signals to the virus and that adverse vaccine reactions are underreported. One recent post falsely claimed vaccines are more likely to kill you than the virus. Some commenters were swayed.

“Thank you so much for all the information you provide us! I will not get the vaccine!” one wrote.

It’s not clear how much money they have made, but there are clues. The Bollingers’ company, TTAC Publishing LLC, filed a lawsuit last year in which they stated that TTAC had secured over $25 million in customer transactions since 2014.

Dun & Bradstreet, which estimates company revenues, estimated TTAC Publishing has earned a little more than $3 million last year. On applications for pandemic-related government loans, TTAC Publishing said it had 16 employees in May 2020, and 27 in February 2021.

The Bollingers employ affiliate marketing, where people are paid for spreading the word about a product. Affiliates for the “Truth About Vaccines 2020” video series would receive an affiliate ID, used to track who referred a customer, according to its web page, which was taken down after AP asked about information posted on it. Affiliates earned 40% commissions on digital products and 30% on physical products, as well as chances for bonuses for top performers.

Kennedy’s nonprofit, Children’s Health Defense, was one of several affiliates listed. In a version captured by the Internet Archive in spring 2020, Kennedy was named among the Top 10 on the series' “Overall Sales Leaderboard.”

Children’s Health Defense made five Facebook posts plugging “The Truth About Vaccines 2020” while using an “affiliate ID." Laura Bono, executive director of the group, said being an affiliate meant only that it “shared their materials” and that “It doesn’t mean there’s a business relationship.”

Bono said the Bollingers donated $10,000 to Children’s Health Defense in December 2019 and that they received what she called a “negligible” amount in donations after people followed their links and chose to buy. She estimated the amount at about $1,000 and declined to clarify.

Others have received substantial amounts. In a lawsuit brought last year, a former affiliate who promoted “The Truth About Cancer” said he earned around $240,000 in commissions from 2015 to 2018.

Super-spreaders of vaccine disinformation such as the Bollingers and Kennedy have exploited their relationships with other groups to access new markets, said Imran Ahmed of the Center for Countering Digital Hate. For example, Kennedy has worked to appeal to African Americans, while the Bollingers have targeted the MAGA movement and far right.

The Bollingers last year founded a political action committee, United Medical Freedom Super PAC. The group paid conservative political consultant Roger Stone more than $11,000 on Dec. 18, for what Stone said was an October rally in Nashville. He was also billed as the keynote speaker for the Bollingers' Jan. 6 “MAGA Freedom Rally D.C.,” but said he did not go after the insurrection at the Capitol.

“The Capitol has been stormed by patriots, we’re here for this reason, we are winning.” She added: “We are at war.”