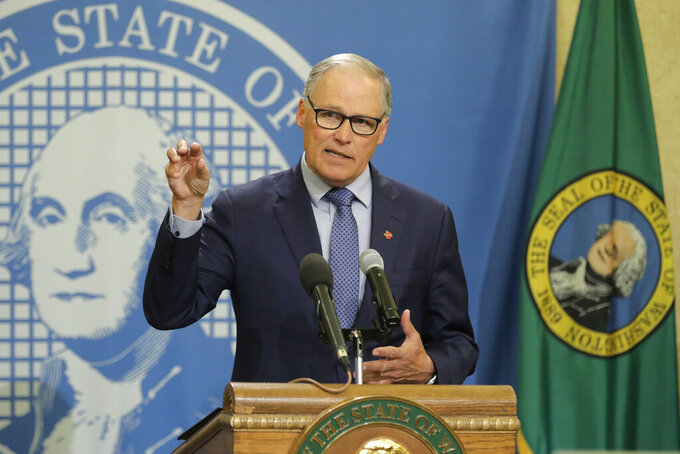 Washington Gov. Jay Inslee speaks during a news conference Monday, April 13, 2020, at the Capitol in Olympia, Wash. Inslee, along with California Gov. Gavin Newsom and Oregon Gov. Kate Brown, announced Monday that they will work together to re-open their economies while continuing to control the spread of COVID-19. (AP Photo/Ted S. Warren)

Trump on Friday via Twitter encouraged demonstrators in the Democratic states of Michigan, Virginia and Minnesota to protest social-distancing rules that experts say can help slow the spread of the virus. Inslee, a Democrat, said in a statement that Trump is encouraging “illegal and dangerous acts.”

“His unhinged rantings and calls for people to ‘liberate’ states could also lead to violence. We’ve seen it before,” Inslee said. “The president is fomenting domestic rebellion and spreading lies even while his own administration says the virus is real and is deadly.”

Washington state saw the nation’s first confirmed coronavirus case in January, as well as the first deadly cluster at a Seattle-area nursing home.

The Seattle Times reports that Inslee took a different tone toward those who oppose his stay-at home order, some of whom may attend Sunday’s demonstration in Olympia.

Asked about the planned demonstration, Inslee said “of course they’re welcome to express their First Amendment rights to say what they want to say.” “I do encourage them to socially distance when they do that, try to maintain six feet apart while you’re expressing yourself.”

The rally, named “Hazardous Liberty! Defend the Constitution!” is in response to the governor’s use of emergency powers to respond to the COVID-19 outbreak.

More than 11,440 people in Washington state have tested positive for the virus and on Friday the number of people who have died topped 600.

The virus causes mild to moderate symptoms in most patients, and the vast majority recover. But it is highly contagious and can be spread by those who appear healthy and can cause severe illness and death in some patients, particularly the elderly and those with underlying health conditions.

He additionally signed a third proclamation which waives and suspends laws that impact community associations meetings and late fees.