Instacart, others push incentives to get workers vaccinated 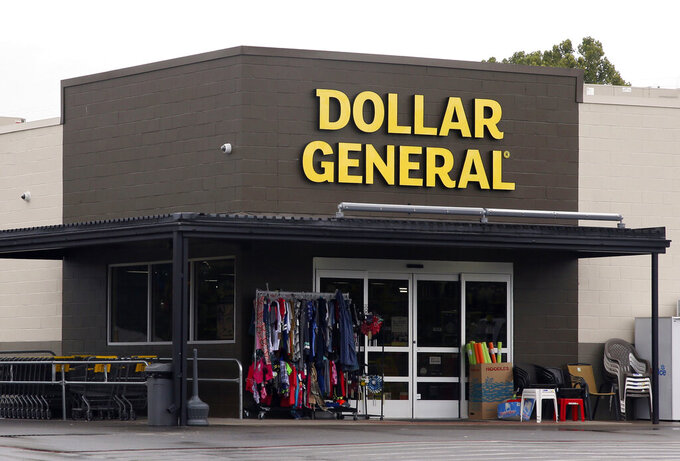 FILE- In this Aug. 3, 2017, file photo the Dollar General store is pictured in Luther, Okla. As vaccinations continue across the U.S., some companies are offering financial incentives to encourage their workers to get the shots. Dollar General is one of the first major companies to announce extra pay for workers who get vaccinated. The Tennessee-based retailer said Wednesday, Jan. 13, 2021 it will give employees the equivalent of four hours of pay if they get the vaccine. (AP Photo/Sue Ogrocki, File)

As vaccinations continue across the U.S., some companies are offering financial incentives to encourage their workers to get the shots.

Instacart Inc., the grocery delivery service, announced Thursday that it would provide a $25 stipend for workers who get the COVID-19 vaccine. It joins others, including Trader Joe's and Dollar General, which plan to pay workers extra if they get vaccinated.

“Our goal with the introduction of our new vaccine support stipend is to ensure that, when the time comes, Instacart shoppers don’t have to choose between earning income as an essential service provider or getting vaccinated,” Instacart CEO Apoorva Mehta said in a statement.

San Francisco-based Instacart has nearly doubled its mostly gig workforce to about 500,000 to meet a surge in demand for online grocery shopping since the pandemic erupted in the U.S. last spring.

Grocery chain Trader Joe's, which has more than 50,000 employees, said Thursday it will give employees two hours of pay per dose for getting the vaccine. The Monrovia, California-based company said it will also shift around schedules to make sure employees have time to get vaccinated.

Dollar General said Wednesday it will give employees the equivalent of four hours of pay if they get the vaccine. The Goodlettsville, Tennessee-based retailer said it employs 157,000 people.

A vaccine advisory panel at the U.S. Centers for Disease Control voted late last month on recommendations for vaccine distribution. The panel said grocery workers — which would include Instacart and Dollar General’s employees — should be in the second group to receive shots after health care workers and nursing home residents.

It is up to each state to decide how and when to adopt the CDC’s recommendations. Some states have already opened eligibility to the second group, which also includes firefighters, police, teachers, corrections workers, postal employees and people 75 and older. There are around 50 million people in that group.

Companies can mandate that workers get COVID-19 vaccines as a requirement for employment, although they must make accommodations for medical or religious reasons, according to guidance from the federal Equal Employment Opportunity Commission.

However, most companies are reluctant to impose such mandates, said Sharon Perley Masling, a partner at the law firm Morgan Lewis who has been advising clients on workplace issues surrounding the COVID-19 pandemic. The emergency nature of the vaccine’s FDA approval makes it impractical for many companies to require it, given that the shots are not available to most of the population, she said.

Still, Masling said the companies she works with are taking various steps to strongly encourage their workers to get vaccinated, including internal public relations campaigns showing top executives who are eligible getting the shots. Other incentives include free child care, paid time off and freebies like pizza delivery and other gifts, she said.

“It’s good for employees, it’s good for their communities and its good for ensuring the continuation of business operations,” Masling said.

The push to vaccinate comes amid signs that some people — even health care workers — are reluctant to get the shots, contributing to a slower than hoped-for rollout of the mass vacation effort in the U.S. Masling said many of companies are still trying to figure out how their employees feel about the taking the shots, with some sending out internal surveys.

In a survey last month by the Society for Human Resource Management, nearly two-thirds of U.S. workers said they were likely to get the vaccine when it becomes available. Still, 36% said they were not likely to get vaccinated, citing as their main reason concern about side effects. SHRM surveyed workers from 529 U.S. households using the AmeriSpeak Omnibus survey, a probability-based panel developed by NORC at the University of Chicago.

Scientists say the vaccines have been rigorously tested on tens of thousands and vetted by independent experts, and there have been no signs of widespread severe side effects from the shots.

Not every company is offering incentives. Delivery app DoorDash, another big platform for gig workers, said it has asked the CDC and governors to prioritize delivery workers in vaccine distribution. But it doesn't plan perks for workers who get vaccinated.

Target Corp. also plans no incentives, but said it will make the vaccine free and accessible to its 350,000 employees. Target said 1,700 of its stores have a CVS pharmacy on site that will offer the vaccine to staff when it's available.

Albertsons, a grocery chain with 2,250 U.S. stores and 300,000 employees, also isn't doling out financial incentives. Like DoorDash, it's asking state and local authorities to make sure its workers get priority for the vaccine.

A separate SHRM survey last month found that while about two-thirds of U.S. employers planned to encourage employees to get vaccinated, only 3% have decided to require it for at least some workers. That could change, since 55% of employers said they were unsure if they would eventually require it, according to survey of 955 members of SHRM, an organization of about 300,000 human resource professionals.

Many large companies have faced criticism over how they have treated their employees throughout the pandemic, from shoddy sick leave policies to poor working conditions. Companies from meatpacking plants to Amazon have grappled with worker absences and outbreaks that have forced temporary shutdowns of their factories and warehouses. There is also a looming debate in Congress over whether employers should be exempt from legal liabilities related to coronavirus exposure as more recall their employees to offices and other work sites.

Those challenges provide a strong incentive for companies to get their workers vaccinated, said Laura Boudreau, an economics professor at Columbia Business School who specializes in labor rights.

“A lot of them have had to defend their reputations in terms of how they are treating their employees throughout the pandemic,” Boudreau said.

Instacart is among several companies that have lobbied for their workers to be prioritized for vaccines. The company has faced criticism and some worker unrest over allegations that it not done enough to protect its gig workers, who don’t get health insurance through the company or guaranteed paid sick leave.

The company says it has distributed 620,000 free safety kits to its workers, including face masks and hand sanitizers. It introduced a new policy in March to provide 14 days of paid leave for gig workers who are diagnosed with COVID-19 or have been ordered to quarantine because of potential exposure.