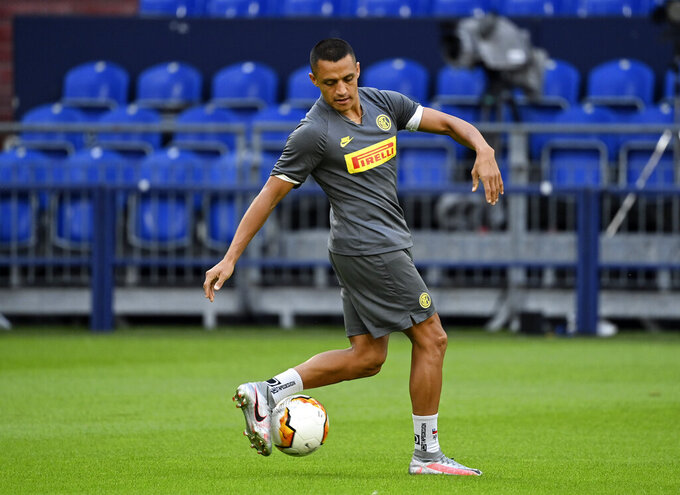 Inter Milan's Alexis Sanchez exercises during the training session prior the Europa League round of 16 soccer match between Inter Milan and Getafe at the Veltins-Arena in Gelsenkirchen, Germany, Tuesday, Aug. 4, 2020. (Ina Fassbender/Pool via AP)

Asked about reports that Sanchez would become an Inter player on a permanent basis, Solskjaer told British broadcaster BT Sport that “I can confirm that. Alexis has had a good time over there, a good player, so we wish him all the best.”

The 31-year-old Chilean forward has been on loan with Inter since August after he struggled for playing time at United. Sanchez struggled to match expectations after joining United from Arsenal in 2018 and scored five goals in 45 games.

At Inter he has been a regular starter since Serie A resumed in June amid the coronavirus pandemic and has four goals in 30 appearances across all competitions this season.

Sanchez played 20 minutes as a substitute Wednesday as Inter beat Getafe 2-0 in the Europa League's round of 16. United completed a 7-1 aggregate win over LASK Linz at the same time.