Interview flap shows challenges as Harris settles in as VP 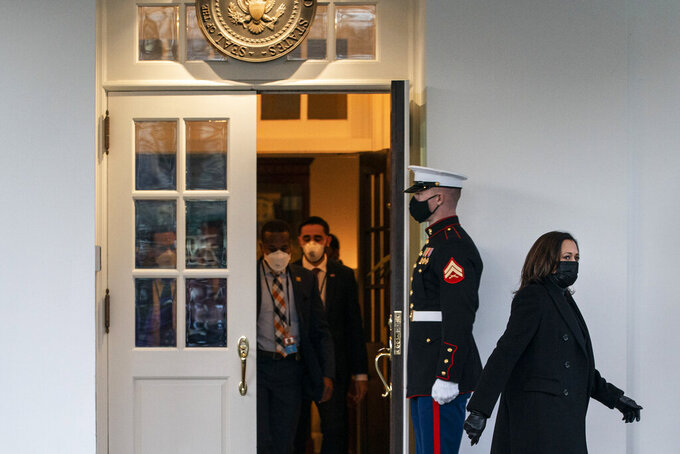 FILE - In this Jan. 22, 2021, file photo Vice President Kamala Harris, right, walks ahead of staff as she leaves the West Wing of the White House in Washington. (AP Photo/Jacquelyn Martin, File)

WASHINGTON (AP) — Vice President Kamala Harris has spent her first two weeks in office working with the president on coronavirus relief, consulting with the head of the World Health Organization and talking with the prime minister of Canada.

It’s her interview with a local news station in West Virginia, though, that’s getting more attention — and not in a good way.

West Virginia Democratic Sen. Joe Manchin, a moderate whose support is critical to the success of President Joe Biden’s agenda in Congress, didn’t take kindly to the vice president’s effort to put public pressure on him in his home state by urging passage of a $1.9 trillion virus relief package, especially when he had no warning it was coming.

"I couldn’t believe it. No one called me,” Manchin said later on the same TV station. “We’re going to try to find a bipartisan pathway forward, I think we need to. But we need to work together. That’s not a way of working together.”

Manchin's critique has come up in the White House briefing room and even made it into chatter on the daytime talk show “The View” on ABC and “The Late Show with Stephen Colbert” on CBS.

The flap was an early signal of some of the issues Harris faces as she settles in and seeks to define her position within the White House.

"Harris has a challenge in figuring out what is her role, what’s her specialty in this White House,” said longtime Democratic strategist Joel Payne.

Harris also misspoke on some details in her West Virginia interview, referring to “abandoned land mines” instead of “abandoned mine lands” in coal country.

White House press secretary Jen Psaki was asked about Harris and her West Virginia remarks twice during Monday’s briefing, and offered little insight into how the interview came about, saying only that “our focus is communicating with the American people” about the coronavirus aid bill.

And by Tuesday, Manchin himself was looking to move past the controversy, telling reporters that it was just a “mistake” and there were “no apologies needed."

In addition to the West Virginia television appearance, Harris also did interviews with the editorial board of the state’s biggest newspaper, as well as with a newspaper and local television station in Arizona, putting pressure on that state's Democratic senators — two moderates whose support Biden will also need to pass his COVID-19 package.

While Harris' overall role remains undefined, she and Biden both often said during the transition that she would be the “last voice in the room” on big decisions, much like Biden was for President Barack Obama. Indeed, Harris is said to view Biden’s vice presidency as a model for her own.

Harris spokeswoman Symone Sanders noted that Harris has been working “closely” with Biden and “has attended nearly every briefing, meeting, and event" with him.

Harris has been reaching out to members of both parties on Capitol Hill, and has called mayors and governors to pitch the COVID-19 package. She's also spoken to Canadian Prime Minister Justin Trudeau and the World Health Organization’s director-general, and held a roundtable with small business owners to discuss coronavirus aid.

Twelve years ago, Biden and Obama entered office representing vastly different generations and different approaches to politics and policy. They eventually became good friends and Obama entrusted Biden with the implementation of the 2009 Recovery Act to revive the economy and with withdrawal of U.S. troops from Iraq.

Harris’ chief of staff during her time as California attorney general, Nathan Barankin, predicted her ability to connect with others would make her a compelling surrogate for Biden if she's able to engage with the public.

“This is a constant, in every briefing or interaction you have with Kamala Harris about policy decisions. And that is, how does this affect real people?” he said.

Payne, who is Black, said that while Harris' history-making position as the first Black and South Asian woman to serve as vice president offers her new opportunities, it may also present complications.

“There are challenges seen and unseen for the first Black woman in this position to quarrel with. She will constantly have to ask herself the question: Would a previous vice president be critiqued in this way?” he said.

Even as Harris aides say she’ll be a central player in the administration’s efforts to sell its COVID-19 package to the public and on Capitol Hill, where she served as a first-term senator until earlier this month, Biden himself has longer and deeper relationships with many senators key to the bill’s passage. And he may be a more popular figure in some of those senators’ states than Harris, who was seen as more progressive than Biden during the primary.

In an evenly divided Senate, if Democrats decide to pursue passage of their COVID-19 bill through a budgetary maneuver that would need only majority support to pass, Manchin is key to Democrats’ chances of success.

Indeed, the White House reached out to Manchin after word got back to them that he was displeased. And prior to the interview, Biden had done his own outreach to Manchin by phone, as the two remain friendly from their time in the Senate.

Even after the interview, Harris’ aides said she was calling lawmakers to advocate for the bill and hear their concerns. She is expected to continue to push for the legislation in public interviews and other events.

They also say she will be particularly engaged in outreach to the Black community on both the bill and the COVID-19 vaccine, aiming to overcome the skepticism around vaccinations within communities of color.

While Manchin’s vote will be needed to get to a tie on the relief package, Harris, as the president of the Senate, would deliver the tie-breaking vote in case of a 50-50 split on the bill, or other major pieces of legislation in the future. The responsibility is certain to keep Harris close to the Capitol when major bills are nearing a vote.

For now, the White House has said it’s avoiding travel anyway, in line with the recommendations of the director of the Centers for Disease Control and Prevention, and is instead looking for “creative” ways to sell the aid package, like town halls and targeted interviews.

Historian Joel Goldstein noted that the ability to cast that tie-breaking vote is a significant opportunity, one that could define Harris’ vice presidency long beyond the end of her first term or any early gaffes she might make on TV.

“To the extent that she has to break tie votes, she will be able to claim credit for taking actions that are important to democratic constituencies,” he said.