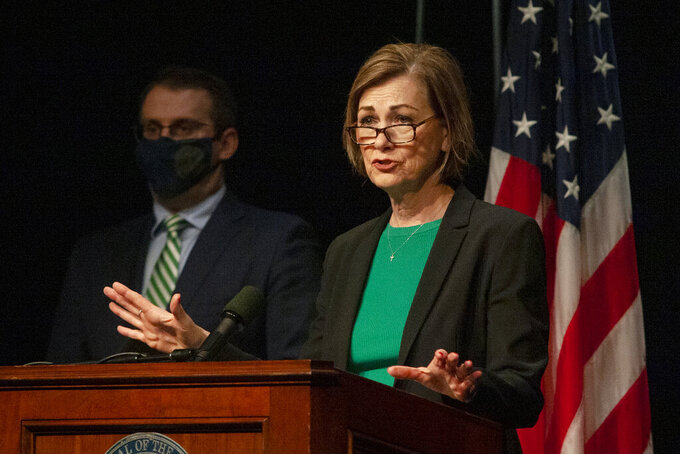 Auditor Rob Sand said an ad campaign launched by Gov. Kim Reynolds in November that was designed to slow the spread of the coronavirus violated the law because it featured Reynolds, who used more than $500,000 of federal coronavirus relief funding for the ads.

Sand said his office conducted an investigation of the ad campaign that was funded with money that was intended to pay for expanded testing capacity for COVID-19 and improved collection and reporting of data about the pandemic.

Sand said Reynolds' office didn't seek federal approval to spend the money on an ad campaign until after it was announced and five weeks after his office requested invoices for the spending.

He said emails show the state got approval for use of the funds in February.

Reynolds in a statement denied she violated the law, saying it clearly provides an exception for when a governor proclaims a disaster emergency. Such a proclamation was in effect for the pandemic at the time.

“Promoting the requirements and recommendations of a disaster proclamation in a public awareness campaign is a clear example of the public-emergency exemption in Iowa’s image-and-likeness statute,” she said.

In the statement, Reynolds’ Chief of Staff Sara Craig said, “Any competent reading of the plain language of state code would have acknowledged the role of the governor in promoting an emergency order.”

Sand responded by saying Reynolds could have suspended the law in her disaster proclamations but did not. “Nothing contained in this declaration shall be construed as an exemption from any other portion of the Iowa Code," her proclamations said.

“Therefore, the law prohibiting statewide elected officials from self-promotion through the use of public moneys applies,” said Sand, an attorney and former assistant Iowa Attorney General.

It's not the first time Reynolds has been challenged for her use of federal COVID-19 relief money.

In October, Sand accused Reynolds of improperly using $21 million in federal virus relief funds for an accounting software system. Federal officials agreed, and Reynolds later returned the money. The Legislature appropriated funding for the system out of state taxpayer funds.

Sand concluded that about $152,000 out of the $511,789 spent on the advertising campaign was used to purchase time and placement of the video featuring Reynolds on websites and radio and television stations statewide, potentially violating the 2018 law.

The law was passed to stop the use of taxpayer dollars for self promotion of politicians, such as the governor and other state officials promoting themselves at Iowa State Fair booths. In addition, State Treasurer Michael Fitzgerald, a Democrat, has appeared in ads promoting the College Savings Iowa program. During legislative debates, Democrats argued whether Secretary of State Paul Pate could no longer distribute fliers about voter registration with his name and photo.

The measure was pushed by Ashley Hinson, who was then a Republican state representative and now is a congresswoman. She argued on the House floor, “This applies to anybody, regardless of party.”

The law says anyone willfully violating it must pay out of their campaign funds an amount equal to that used to fund the communication. A violator may also be subject to a serious misdemeanor criminal charge.

Sand said Reynolds would have known her legal duty to avoid self-promotion in the ads because she signed the law.

He added “the violation appears to be voluntary and intentional because the governor herself publicly announced and described the ad campaign, sat down to film her portions of it, and chose to read multiple lines so that at three times during the video spots, all three identifying characteristics that the law prohibits (name, likeness, and voice) were present.”

Sand's report said the Iowa Ethics & Campaign Disclosure Board should review the issue.

Sand, who is serving his first term as state auditor, is often mentioned as a potential challenger to Reynolds if she runs again. He has not said whether he will seek reelection or run for another office in November 2022.