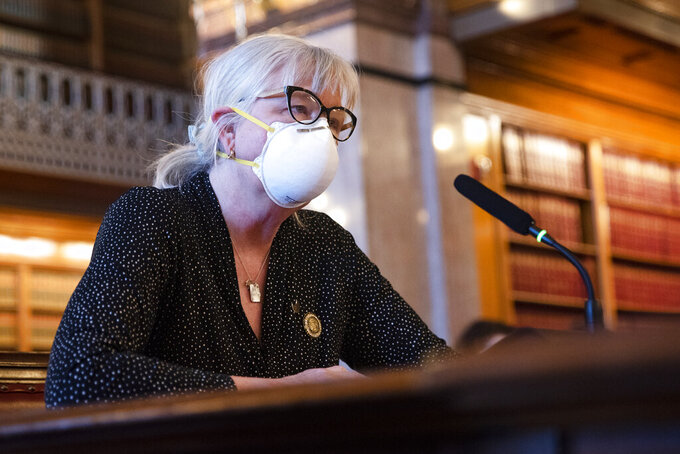 Rep. Beth Wessel-Kroeschell (D, D-45) speaks on Tuesday, Jan. 19, 2021, in opposition to HSB 9, a legislation proposing an amendment to the Iowa Constitution that upholds the right to keep and bear arms at the Iowa State Capitol, in Des Moines. (Olivia Sun/The Des Moines Register via AP)

DES MOINES, Iowa (AP) — A state lawmaker wore jeans on the floor of the Iowa House to draw attention to Republicans' refusal to mandate masks in the chamber even as they ban members from wearing jeans.

Democratic Rep. Beth Wessel-Kroeschell of Ames wore jeans Tuesday during House debate. When the chief clerk asked her to change, she declined.

“I told the chief clerk, jeans aren’t hurting anybody but all the people wandering around without masks on, they are," Wessel-Kroeschell said Wednesday.

Neither the House nor the Senate allows members or staff on the floor of the chambers to wear jeans or T-shirts, and men must wear a jacket and tie. Republican leaders have encouraged members to wear masks to prevent the spread of the coronavirus but have refused to require face coverings.

Democrats have increasingly pointed to the apparent contradiction between enforcing a dress code but not a mask requirement as five people associated with the House have now tested positive for the virus. That number could be higher because Republicans also don't require people to report a positive test.

House Speaker Pat Grassley has said he couldn't enforce a mask mandate, arguing his only recourse would be to have an officer remove a member refusing to comply. Grassley said he's unwilling to do that.

When Wessel-Kroeschell tried to speak during debate Tuesday, Grassley refused to recognize her, saying she had violated House rules. She was allowed to vote.

Wessel-Kroeschell said she'd succeeded in making her point that there is an enforcement mechanism for a mask requirement if leadership chose to use it.

She said at least six Republican House lawmakers are not wearing masks and many others have them underneath their nose. She must attend committee meetings with some of them since Grassley has required members to attend committees in person if they want to speak. She said microphones used in the meetings are shared, a practice she called very dangerous.

"Things are really tense. I'm very concerned and actually I've decided I'm going to go home this afternoon and work from home," she said. “I will come back next week but I am going to be more and more cautious. I am double masking."

A fifth person working at the Iowa Capitol tested positive for the coronavirus on Tuesday.

Rep. Amy Nielsen, a Democrat from North Liberty, has confirmed she was one of them, marking the first known case of an Iowa lawmaker contracting the virus during the legislative session. She said she believes she was infected at the Capitol. She has developed COVID-19 symptoms and said Tuesday she was not well.

Asked about why the House could enforce a dress code but not a mask rule, Grassley spokeswoman Melissa Deatsch said in a statement, “The speaker has been clear and consistent since the start of session. There is no way to enforce a mask mandate short of having state patrol remove a duly-elected representative from the floor, which is not something he is willing to do, for masks or for jeans. Rep. Wessel-Kroeschell was in violation of House rules and it is within the speaker of the House’s discretion to handle such violations as he sees fit.”

The disagreement came as Iowa reported 56 additional deaths on Wednesday for a state total of 4,975.

The seven-day rolling average of the positivity rate in Iowa is 24.8%, the third highest rate in nation,