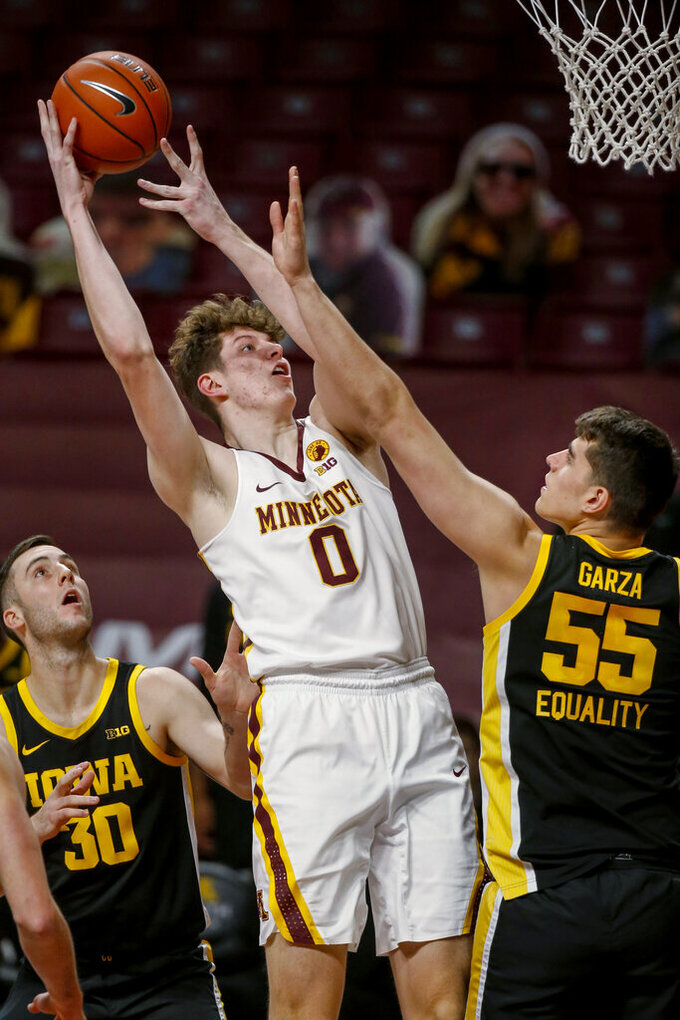 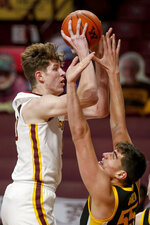 Here's a look at the upcoming week around the Big Ten Conference:

No. 10 Iowa (8-2, 2-1) at No. 14 Rutgers (7-1, 3-1). The Hawkeyes rebounded confidently from their late lapse on Christmas night, when Minnesota overcame a seven-point deficit with 44 seconds left in regulation and won 102-95 in overtime, with a 15-point victory over Northwestern. Jordan Bohannon had 24 points on 6-for-9 shooting from 3-point range against the Wildcats, after totaling just 27 points over the previous five games. Ron Harper Jr. and the Scarlet Knights, who were prevented by the pandemic last season from making the first NCAA Tournament appearance for the program since 1991, have hardly been at full strength. Harper, who's fourth in the conference in scoring at 23.4 points per game, missed the win over Purdue on Tuesday after hurting his ankle. Preseason All-Big Ten honoree Geo Baker sat out three games, and Jacob Young, Mawot Mag and Cliff Omoruyi have all missed time.

The Big Ten landed a record nine teams in the latest Associated Press poll, further evidence that — despite the empty arenas — this season is tracking toward one of the strongest in league history. Wisconsin, which soared to No. 6 after winning at No. 17 Michigan State on Friday, promptly lost at home to Maryland on Monday. The Badgers were preparing to host No. 21 Minnesota on Thursday, the first half of a league twin bill on New Year's Eve that's followed by another tough test for the regenerating Terrapins, whose top two players last season — Anthony Cowan and Jalen Smith — departed. They host No. 16 Michigan, the lone undefeated squad left. The Wolverines then host No. 19 Northwestern on Sunday. No. 15 Illinois is about the only team with an opportunity to breathe this week. The Illini host Purdue on Saturday, their only game in an 11-day span. The other ranked-against-ranked matchups are No. 25 Ohio State at Minnesota on Sunday, Rutgers at Michigan State on Tuesday and Minnesota at Michigan on Wednesday.

Liam Robbins, one of three transfers in Minnesota's starting lineup, scored 18 points in each of the last two games. He further fueled those statement victories over Iowa and Michigan State with a total of 14 rebounds, seven blocks, two assists and one steal, while making a 3-pointer in both games and shooting 12 for 21 from the floor. The 7-foot, 235-pound Robbins, who played his first two years at Drake, had a quiet start in the adjustment to new surroundings and a higher level of competition after a pandemic-limited preseason. In recent weeks, he has improved his post positioning and found a better rhythm with the guards in the half-court offense to help give the Gophers one of their most well-rounded teams in eight years under coach Richard Pitino.

Ayo Dosunmu became the first Illinois player since 1997 to post consecutive 30-point games in wins over Penn State and Indiana. He's the only player in the country averaging at least 20 points, five rebounds and five assists. ... Minnesota leads the nation with an average of 30 free throw attempts per game. The Gophers are fourth in the Big Ten with 75.7% shooting from the foul line, which would be a program record for a full season. The previous mark was set in 1976-77. ... Michigan State, which plays at Nebraska on Saturday, is 0-3 in Big Ten play for the first time since the 2001-02 season. ... The nine teams in the latest AP poll were the most by any conference since the Big East had nine on March 7, 2011.

After a seven-day holiday break in the league schedule, there's a five-game slate for Thursday that features No. 14 Maryland at Penn State and No. 15 Northwestern at Nebraska. Michigan (16th), Ohio State (17th), Indiana (20th) and Michigan State (25th) landed in the latest AP poll, the first time in history the conference has had six ranked women's teams for multiple weeks in the same season. The other ranked-against-ranked matchups in the coming days are Michigan at Northwestern on Sunday and Indiana at Maryland on Monday. The Big Ten leads the country in cumulative scoring (80 points per game) and shooting (46.1%).