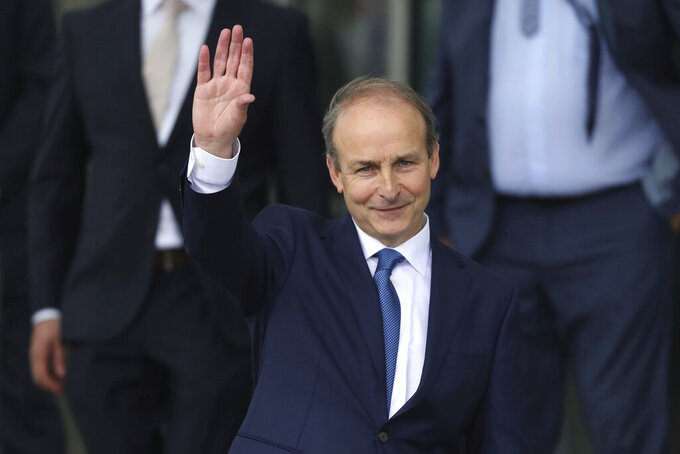 Fianna Fail party leader Micheal Martin leaves the Dail government in Dublin, where he has been officially elected as the new Irish Premier, Saturday June 27, 2020. As part of a pact between Martin and former premier Varadkar, Martin will take the role of Premier until December 2021, with Mr Varadkar resuming the role for the remainder of the Government term of office. (Niall Carson/PA via AP)

The deal will see Martin’s Fianna Fail govern with Fine Gael — the party of outgoing leader Leo Varadkar —and with the smaller Green Party. Fianna Fail and Fine Gael, bitter opponents whose roots lie in opposing sides of the civil war that followed Ireland’s independence from the United Kingdom, have never before formed a government together.

“I believe civil war politics ended a long time ago in our country, but today civil war politics ends in our parliament,’’ said Varadkhar, who became Ireland's youngest and first gay prime minister three years ago. “Two great parties coming together with another great party, the Green Party, to offer what this country needs, a stable government for the betterment of our country and for the betterment of our world.''

The Dail, the lower house of Ireland's parliament, elected Martin by a vote of 93-63, with three abstentions. Martin later met with Irish President Michael D Higgins to receive his seal of office.

Under the plan approved by the parties’ memberships, Martin became taoiseach, or prime minister. He will serve until the end of 2022 and then hand the job back to Varadkar.

The left-wing nationalist party Sinn Fein was shut out of the new government even though an electoral breakthrough that saw it win the largest share of the votes in February’s election. Despite coming out ahead, Sinn Fein was unable to assemble enough support to govern.

The two centrist parties have long shunned Sinn Fein because of its historic links to the Irish Republican Army and decades of violence in Northern Ireland. But in protracted negotiations further complicated by the COVID-19 outbreak, the two rival centrist parties opted for unity.

Sinn Fein President Mary Lou McDonald said Fianna Fail and Fine Gael conspired to exclude her party and the voices of more than half a million people who voted for her party. She called the coalition a “marriage of convenience.”

“Faced with the prospect of losing their grip on power, Fianna Fail and Fine Gael have circled the wagons,” McDonald said.

The election campaign was dominated by domestic issues. Ireland has a growing homelessness crisis, house prices that have risen faster than incomes and a public health system that hasn’t kept up with demand.

Since then, the COVID-19 pandemic has only exacerbated the country's problems. Underscoring the changes the virus has wrought, the Dail’s session Saturday was held at the Dublin Convention Centre rather than lawmakers' permanent chamber to allow for social distancing.

Martin said that dealing with the pandemic would be the centerpiece of his leadership.

“The struggle against the virus is not over,’’ he said. “We must continue to contain its spread. We must be ready to tackle any new wave, and we must move forward rapidly to secure a recovery to benefit all of our people.”

The son of a former Irish international boxer, Martin, 59, had initially embarked on a career as a secondary school teacher before devoting himself to politics.

He’s had a number of roles in more than 30 years of public life, including serving in four Cabinet posts. In his speech, he described being named taoiseach of a free republic as being the greatest honor one could achieve. He thanked those who voted for him.

“Most of all I want to thank my family and my community,'' Martin said. “Without them I could have achieved nothing.''