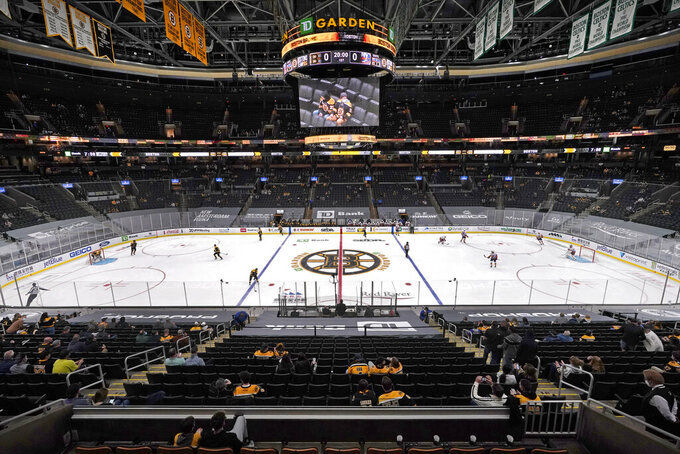 Hockey fans sit socially distanced in TD Garden before an NHL hockey game between the Boston Bruins and the New York Islanders, Thursday, March 25, 2021, in Boston. This is the first game of the 2021 season allowing limited fan attendance in the arena. (AP Photo/Elise Amendola)

BOSTON (AP) — Anthony Beauvillier scored 21 seconds into overtime and the New York Islanders rallied from a two-goal deficit to beat the Bruins 4-3 on Thursday night in the first major league sporting event in Boston with fans in attendance since the pandemic shutdown.

The Islanders trailed 2-0 after one period but Jean-Gabriel Pageau cut the margin in half in the second, Josh Bailey tied it in the third and Oliver Wahlstrom gave New York the lead with 2:56 left in regulation. Just 54 seconds later, though, Anders Bjork tied it again.

Right after the faceoff to begin the extra period, Nick Leddy brought the puck into the Boston zone and snapped off a shot that bounced off goalie Jaroslav Halak and trickled into the crease. Beauvillier came along to swipe it in.

“We got the two points,” Islanders coach Barry Trotz said. “That’s all we care about, collecting points.”

Semyon Varlamov stopped 25 shots for the Islanders, who won their third straight and 12th in the last 14 games.

Karson Kuhlman and Steven Kampfer scored for Boston, and Halak stopped 14 of the 18 shots he faced after relieving Tuukka Rask to start the second period. Rask, who hadn't played since March 7, left with an unspecified injury.

A mostly masked crowd of 2,191 — 12% of capacity — was at the TD Garden to see the Bruins return from a weeklong pause after five players went into the NHL's COVID-19 protocol. (Two games were postponed.) They cheered heartily when Boston opened a 2-0 lead in the first period; other times, individual shouts could be singled out in the building, which usually holds 17,850 for hockey.

“It’s not going to replace 18,000. But it’s nice to hear them again,” Bruins coach Bruce Cassidy said. “Unfortunately, we couldn’t send them home in a better mood. I’m sure they’re frustrated, but we are as well.”

The Bruins played in front of their home crowd for the first time since March 7, 2020. Fans were scattered through most of the building, about a dozen per section, a large number of them in Bruins jerseys.

Before the opening faceoff, they were greeted by the public address announcer with: “Good evening, and for the first time since the 2020 season, welcome to the TD Garden.”

Todd Angilly sang the first live national anthem of the team’s home schedule, and the crowd broke into a chant of “Let’s go, Bruins!” But at other times it was quiet enough to identify the few Islanders fans in Section 315.

“I think it’s great that we got fans back and got the support,” Kampfer said. “We know that the fans want to be here. It’s one step closer to being back to normality. We’re getting closer to rounding this curve.”

The first big reactions were for a Boston penalty that was reviewed and then waved off about two minutes in. The Bruins brought the crowd to its feet when Kuhlman beat Varlamov from the left circle with eight minutes gone.

Kampfer gave Boston a 2-0 lead on a power play with 2:25 left in the first. Charlie McAvoy had an assist on each of the first two goals, and both were set up by Charlie Coyle’s screens.

But the Bruins couldn’t capitalize on a high-sticking penalty to Scott Mayfield that drew blood in Patrice Bergeron’s mouth. Nine seconds after the four-minute penalty expired, Mayfield set up Pageau’s goal to cut the deficit to 2-1.

Bailey tied it with 4:33 gone in the third on a feed from Brock Nelson. Wahlstrom gave the Islanders their first lead on a pass from behind the net that he slid over to his backhand before beating Halak high on the glove side.

BACK ON THE ICE

The Bruins were back on the ice for the first time in a week, after five players entered the COVID-19 protocol. David Krejci, David Pastrnak and Craig Smith were cleared to play; Sean Kuraly and Jake DeBrusk remained sidelined.

The team was able to return to practice on Wednesday night, but a pregame skate at their practice arena Thursday morning was canceled because of a scheduling conflict with the NWHL playoffs.

Rask stopped six of six shots in the first period and then exited with an unspecified injury.

“He left and I haven’t seen him since,” Cassidy said.