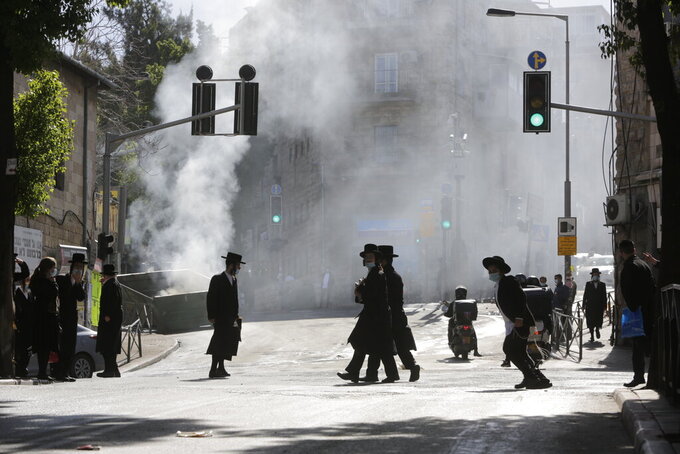 Men walk amid smoke from a dumpster fire, in an ultra-Orthodox neighborhood in Jerusalem, Sunday, Jan. 24, 2021. Ultra-Orthodox demonstrators clashed with Israeli police officers dispatched to close schools in Jerusalem and Ashdod that had opened in violation of health regulations on Sunday. (AP Photo/Sebastian Scheiner)

JERUSALEM (AP) — Prime Minister Benjamin Netanyahu on Sunday said Israel will be closing its international airport to nearly all flights, while Israeli police clashed with ultra-Orthodox protesters in several major cities and the government raced to bring a raging coronavirus outbreak under control.

The entry of highly contagious variants of the virus, coupled with poor enforcement of safety rules in ultra-Orthodox communities, has contributed to one of the world's highest rates of infections. It also has threatened to undercut Israel's highly successful campaign to vaccinate its population against the virus.

In just a month, Israel has vaccinated over a quarter of its 9.2 million people. At the same time, the virus continues to race through the country, with authorities confirming an average of over 8,000 new cases a day.

Late Sunday, the Israeli Cabinet approved a tight closure on nearly all incoming and outgoing air traffic. The government said it would make exceptions for a small number of humanitarian cases - such as funerals and medical patients - and cargo flights.

“We are closing the skies hermetically, except for really rare exceptions, to prevent the entry of virus mutations, and also to ensure that we progress quickly with our vaccination campaign," Netanyahu said.

The order is to begin early Tuesday and remain in effect until Jan. 31. Netanyahu's office said the order still required parliamentary legislation to be finalized.

Throughout the pandemic, Israel has restricted entry for most foreigners at its main international airport. But it has made exceptions for certain categories of people, including religious students and Israelis returning from abroad, while allowing Israeli tourists to fly to a handful of “green countries" believed to have low rates of the coronavirus.

This limited air travel appears to have allowed highly contagious coronavirus variants from the U.K. and other places to enter Israel. The Health Ministry said Sunday that it had detected the first case of a new coronavirus variant discovered in the U.S., brought in by a man who arrived from Los Angeles.

Experts say that a lack of compliance with safety regulations in Israel's ultra-Orthodox sector also has been a major factor in the spread of the virus.

Israeli police have been largely reluctant to confront the ultra-Orthodox community. On Sunday, police clashed with large crowds of ultra-Orthodox protesters in several cities, with an officer firing into the air in one city to keep a large crowd at bay.

Throughout the pandemic, many major ultra-Orthodox sects have flouted safety regulations, continuing to open schools, pray in synagogues and hold mass weddings and funerals despite broader lockdown orders. This has contributed to a disproportionate infection rate: The ultra-Orthodox community accounts for over one-third of Israel's coronavirus cases, despite making up just over 10% of the population.

Israel has recorded over 595,000 cases of the virus since the start of the pandemic and over 4,361 deaths. New cases continue to climb, even as the country has launched one of the world’s most successful vaccination campaigns and is in the midst of its third nationwide lockdown.

The worst unrest on Sunday occurred in the ultra-Orthodox city of Bnei Brak, where large crowds of young men clashed with police and threatened journalists. At one point, a police officer drew his pistol and fired into the air to get a crowd to back off.

In the coastal city of Ashdod, police scuffled with dozens of protesters outside an ultra-Orthodox school.

Five police officers were wounded in the disputes, and at least four people were arrested, police said.

“I expect all citizens of Israel to respect the safety guidelines. That includes all the sectors, including the ultra-Orthodox," Netanyahu said.

Netanyahu, who is relying on ultra-Orthodox support in upcoming national elections, said that most of the community has respected safety guidelines. He attributed the latest troubles to a small minority acting in an “unacceptable” manner.

Sunday’s clashes were the latest incident of heightened tensions over enforcement of lockdown rules in ultra-Orthodox neighborhoods in Israel. On Friday, ultra-Orthodox Israelis attacked a police vehicle in the city of Bnei Brak, outside Tel Aviv.