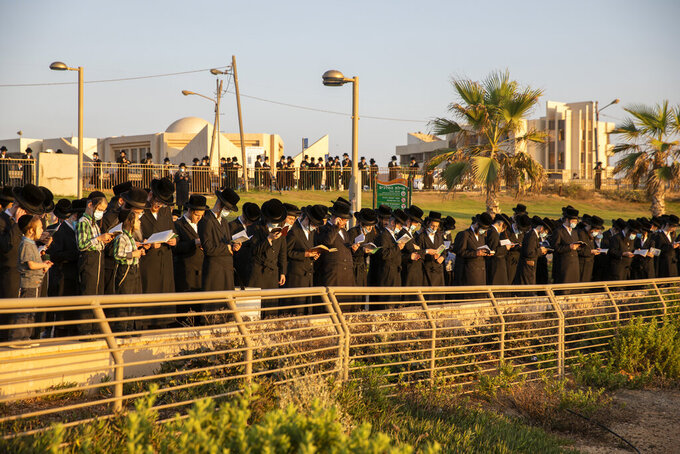 Ultra-Orthodox Jews of the Kiryat Sanz Hassidic sect pray on a hill overlooking the Mediterranean Sea as they participate in a Tashlich ceremony during a nationwide three-week lockdown to curb the spread of the coronavirus in Netanya, Israel, Thursday, Sept. 24, 2020. Israel moved to further tighten its second countrywide lockdown as coronavirus cases continued to soar. (AP Photo/Ariel Schalit)

Earlier this week, the Cabinet agreed to tighten the country's second lockdown in response to a surge in coronavirus cases. The government has ordered all nonessential businesses to close and people to remain within 1,000 meters (yards) from home for at least the next two weeks.

The orders went into effect Friday afternoon but must be approved by the Knesset, or parliament, where lawmakers are bitterly split over restrictions on political demonstrations and public prayers during the ongoing Jewish High Holidays.

Netanyahu and his allies have pushed for restrictions on the weekly demonstrations held in recent months outside his official residence. The protests are focused on his handling of the coronavirus as well as his indictment on a series of corruption charges.

“The law cannot be passed today with 4,000 amendments from the opposition,” Netanyahu's right-wing Likud party said in a statement. “This is happening because of the opposition’s obsession with allowing the festival of the ‘demonstrations.’”

Israel shuts down on Friday evenings for the weekly Jewish Sabbath, and will not reopen until Tuesday, following the solemn Yom Kippur holiday.

“As it won't be possible to complete the legislation by next Tuesday, Likud has proposed regulations for a state of emergency for several days to prevent mass demonstrations," it said.

That proposal was rejected by Benny Gantz, Netanyahu's main rival-turned-partner in the coalition government, which was formed in May to combat the virus but has been hobbled by infighting.

“The decision on a stringent lockdown was designed to stop the spread of the virus, not to block protests or communal prayer," he said in a statement. "We will keep pushing the legislation within the rules of democratic process and will prevent using emergency regulations that are focused solely on protests, prayers, or any other specific target.”

Israel's ultra-Orthodox leaders — key political allies of Netanyahu — have objected to restrictions on public prayers, accusing the mostly secular authorities of discriminating against them while allowing the street protests to continue.

Critics counter that a far larger number of Israelis participate in prayers and that they are still often held indoors, where transmission is much more likely. Others have accused Netanyahu of using the lockdown as a pretext to end the demonstrations against him, allegations the prime minister has said are “absurd.”

Israel was praised for its initial response to the outbreak last spring, when it moved quickly to seal its borders and close businesses. But authorities reopened the economy too fast in May, and since then there has been a surge of cases. Israel is currently reporting more than 7,000 new cases a day in a nation of just 9 million people — one of the most severe outbreaks in the world on a per capita basis.

Israel has reported more than 210,000 cases since the pandemic began, including 1,405 deaths. It currently has more than 60,000 active cases, including 700 patients in serious condition.