Italy to allow fans at Euros, some other hosts yet to decide 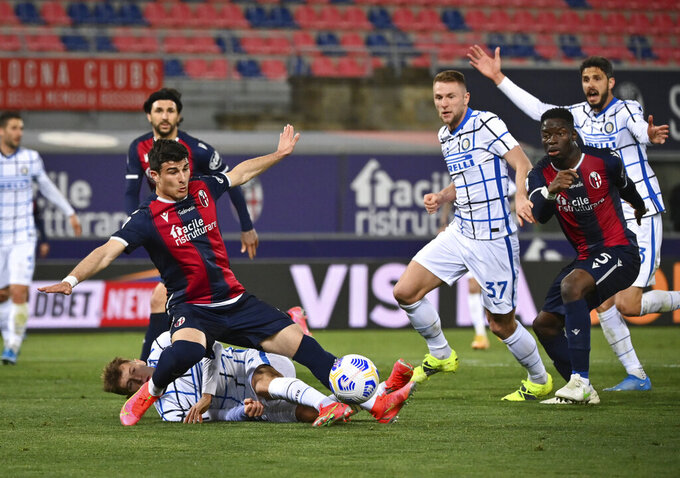 Bologna's Riccardo Orsolini competes for the ball with FC Internazionale Milano's Nicolo Barella during the Italian Serie A soccer match between Bologna and Inter Milan at the Renato Dall'Ara stadium in Bologna, Italy, Saturday, April 3, 2021. (Massimo Paolone/LaPresse via AP)AP)

Italy is ready to let fans back into stadiums in time for Rome hosting European Championship games. Other countries are yet to offer the same assurances.

The pandemic-delayed tournament is being staged in 12 cities in as many countries, and UEFA told hosts to let them know by this week about its plans to let supporters into games.

Italian Health Minister Roberto Speranza informed the country's football federation on Tuesday that fans can attend the four matches in Rome’s Stadio Olimpico based on protocols from scientific advisors.

“The willingness obtained from the Italian government is an excellent result that is good for the country, not just football,” FIGC President Gabriele Gravina said.

There is a risk that cities could be cut from the hosting if they can't say if crowds will be allowed by June. Those guarantees are yet to come from countries including Scotland, which is due to stage four games in Glasgow, and Ireland, which also has four fixtures in Dublin.

While parts of Europe are in the midst of a third wave of coronavirus infections, the city of Munich says it has now submitted updated plans to UEFA.

“It is of course conceivable and desirable that spectators can be in the stadium for the four games in Munich," local authorities said Tuesday.

Italy will play Turkey in Rome on June 11 in the first match of the competition, which was postponed by one year because of the coronavirus pandemic. Italy will also play its other two matches at the Olimpico, which will also host a quarterfinal.

“A strong signal has been sent to us heading towards recovery and we will promptly pass it on to UEFA," Gravina said.

The city with the most games is London, which will stage seven fixtures at Wembley including the semifinals and final. Wembley will see the return of fans this month for the first time in more than a year when 4,000 spectators are allowed into an FA Cup semifinal and 8,000 will be permitted at the League Cup final. The FA Cup final will then have a crowd of 21,000 in May thanks to England's success in rolling out a vaccination program and bringing down coronavirus cases.

“This is an important first step towards getting fans back, with the end goal of full stadia — hopefully by the end of the men’s Euros," English Football Association chief executive Mark Bullingham said.

In Scotland, no date has been set for the return of fans but provisional proposals will be submitted to UEFA this week. Scotland will host the Czech Republic and Croatia at Hampden Park after its men qualified for a first major tournament since the 1998 World Cup.

“We are well aware of the deadline and while these are not final decisions for us, I am optimistic we will have matches played here in Scotland with a number of spectators, a reasonably good number of spectators in Hampden for them," First Minister Nicola Sturgeon said. “But obviously these are discussions and deliberations and decisions that have to be made by the appropriate authorities.”

Russia has already confirmed that St. Petersburg’s 65,000-seat stadium will be filled to at least 50% capacity for its four games. Denmark is planning on up to 12,000 fans being allowed into the four matches at the 38,000-capacity Parken Stadium. A similar number could be attending games in Romania under government plans for the 55,000-capacity national stadium in Bucharest to be at least a quarter filled.

Daniella Matar in Milan contributed to this report.