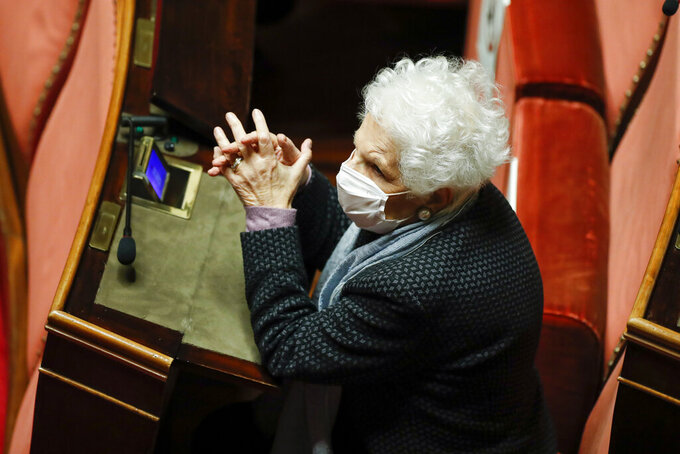 FILE - In this Jan. 19, 2021 file photo, 90-year-old Holocaust survivor Liliana Segre wears a face mask to curb the spread of COVD-19 as attends the debate at the Senate prior to a confidence vote, in Rome. On Friday, Feb. 19, 2021, Italian Interior Minister Luciana Lamorgese expressed solidarity and closeness to Segre and denounced the “new and unacceptable attack she suffered on the (social media) network” marked by a “very dangerous mix of hate, violence and racism.” Segre's efforts to encourage other older adults to receive the anti-COVID-19 vaccine as she did have triggered a wave of anti-Semitic comments and other invective on social media. (Yara Nardi/pool photo via AP, file)

ROME (AP) — An Italian Holocaust survivor’s attempt to encourage other older adults to receive the anti-COVID-19 vaccine has triggered a wave of anti-Semitic comments and other invective on social media.

Liliana Segre, 90, received the first of the two-shot vaccine series in Milan on Thursday. She urged people who reach her age “to not be afraid and to take the vaccine.”

After Segre's comments received negative social media attention, Italian Interior Minister Luciana Lamorgese expressed solidarity with her and denounced the “new and unacceptable attack" which he said was marked by "a very dangerous mix of hate, violence and racism.”

Segre publicly bared a shoulder to receive her vaccine injection at a hospital on the first day that Milan began administering the shots to residents age 80 and older. She said that she believed that those who refuse to be vaccinated are “either too frightened or not informed enough.”

“So, as a 90-year-old grandmother, I tell my ‘brothers’ and `sisters' who reach this age to not be afraid and to take the vaccine," she said.

Segre holds one of Italy's highest honors. In 2018, President Sergio Mattarella made her a senator-for-life in tribute to her years of speaking about the Holocaust with Italian schoolchildren in classrooms across the nation.

When German troops occupied Italy during World War II, many of the members of Italy’s tiny Jewish minority were rounded up in Rome and elsewhere for deportation.

Segre was one of the few Italian children to survive deportation to a Nazi death camp. She and her family went into hiding after fascist dictator Benito Mussolini's regime introduced anti-Jewish laws but were arrested in 1943 and put onto trains departing from Milan toward Nazi-run camps.

The 1938 racist laws targeting Jews were abolished with Mussolini's death in 1945.

This version has been corrected to show Segre’s first name is Liliana, not Lilian.