Italy's Mancini: Playing without fans will 'feel a bit sad' 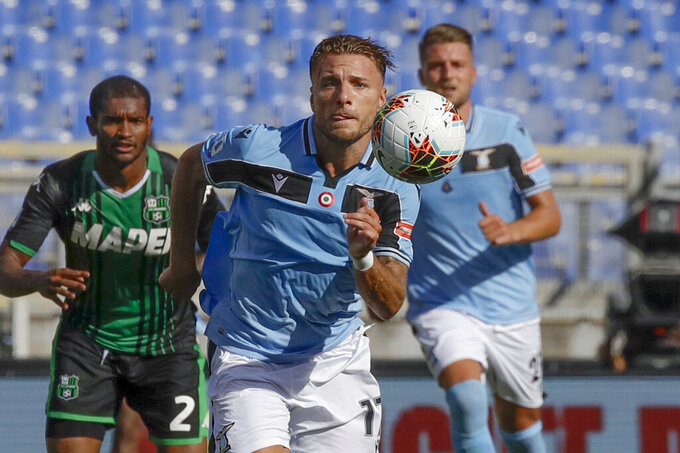 FILE - In this Saturday, July 11, 2020 file photo, Lazio's Ciro Immobile eyes the ball during the Serie A soccer match between Lazio and Sassuolo at the Rome Olympic Stadium. Prolific scorer Ciro Immobile has extended his contract with Lazio through 2025. His previous contract was due to expire in 2023.“This is important, because Immobile had gained the attention of some big clubs, considering that he’s the European Golden Shoe holder,” Lazio communications director Stefano De Martino said Monday. (AP Photo/Alessandra Tarantino, File)

Starting with the national anthems.

“It won't be too nice without the fans," Italy midfielder Alessandro Florenzi said Thursday, a day before a Nations League game against Bosnia-Herzegovina inside an empty stadium Florence. "Singing the anthem is something that really motivates us together with the crowd."

Rebuilding after an embarrassing failure to qualify for the 2018 World Cup, Italy extended its record winning streak to 11 matches when it last played 10 months ago.

The enthusiasm surrounding Roberto Mancini’s squad was increasing victory by victory -- especially with Italy due to host the opening game of the 2020 European Championship.

Then came the coronavirus.

“I’ll definitely feel a bit sad,” Mancini said about the prospect of playing in an empty stadium. “I think we’ve reached the point where we can do more. I really hope to see fans inside the stadiums as soon as possible.”

Italy, the first Western country to suffer from a major coronavirus emergency, has had more than 35,000 deaths from COVID-19.

“It will be an honor to put on this shirt for a country that went through that and is getting back on its feet,” Florenzi said.

Midfielder Sandro Tonali was dropped from Italy’s squad after he was placed in isolation by Brescia over concerns of exposure to the virus from a teammate. Chelsea left back Emerson Palmieri was left out for the same reason.

Midfielder Jorginho -- usually a starter -- joined the team late from Chelsea after he, too, had to be doublechecked for COVID-19.

Making matters more complicated is that midfielder Marco Verratti is out injured.

Bosnia, which was beaten twice by Italy in Euro 2020 qualifying, will be without midfielder Miralem Pjanić, who recently tested positive for the virus.

On Monday, Italy visits the Netherlands in another Nations League game.

The Azzurri failed to advance from the group stage in the 2018-19 Nations League -- Mancini’s first tournament in charge.

“The hope is that we pick up where we left off 10 months ago and that fans continue to follow us,” Mancini said. “Hopefully things will get back to normal soon.”