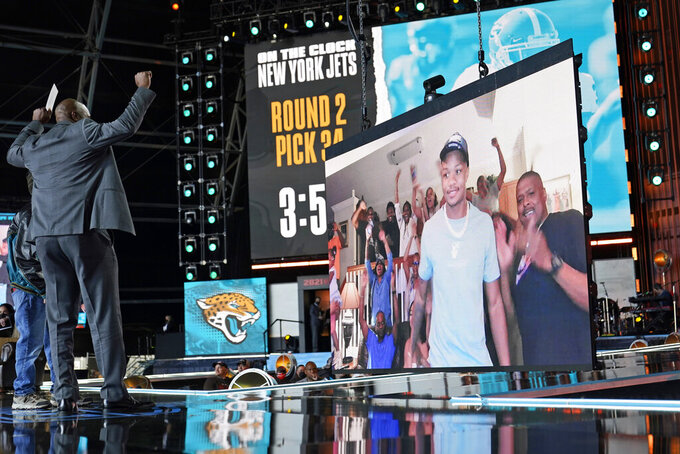 Former Jacksonville Jaguar Kevin Hardy raises his arms as an image of Georgia cornerback Tyson Campbell is displayed during the second round of the NFL football draft, Friday, April 30, 2021, in Cleveland. The Jaguars selected Campbel(AP Photo/Tony Dejak)

JACKSONVILLE, Fla. (AP) — The Jacksonville Jaguars used the second night of the NFL draft to line up potential replacements for three starters.

Grabbing Campbell so early raised questions about the team’s confidence in CJ Henderson, the ninth overall pick in 2020 who missed eight games as a rookie and was inconsistent when he was on the field.

Little is expected to be groomed to replace up-and-down left tackle Cam Robinson, who recently signed a one-year franchise tag worth $13.75 million in 2021. Robinson was ranked as one of the league's least effective pass-blockers last year.

Little played one game in 2019 before tearing a ligament in his left knee. He opted out of last season because of the coronavirus pandemic.

“Just trying to be at my peak and step in as soon as I can,” Little said. “I have no concerns about playing again.”

Cisco gives the Jaguars an eventual starter opposite newly signed safety Rayshawn Jenkins. Cisco, who has 13 interceptions in 24 career college games, is coming off a torn knee ligament. He injured his knee while colliding with a teammate during pregame warmups in late September.

Jacksonville has five picks remaining Saturday, including two in the fourth round. Tight end, defensive tackle and edge rusher are areas of need.

Campbell has played exclusively at cornerback, but said he would be willing to do anything to get on the field as a rookie.

“I'm versatile and I could learn a new position,” Campbell said. “I trust my feet, trust my hips. I feel like I can run with anybody.”

Under the NFL’s rookie slotting system, Campbell is slated to earn sign a four-year contract worth a little more than $9 million.

So that’s about $70 million committed to three cornerbacks, a head-scratching decision even though arguments could be made that NFL teams play five or more defensive back about 60% of the time.

The 6-foot-1, 193-pound Campbell led Georgia with five pass breakups in 10 starts last season. He also had 29 tackles, including 2½ for loss, and an interception.

The Jaguars had their worst defense in franchise history last season, setting team records for points and yards allowed. They ranked 31st in the league in total defense and scoring.

Coach Urban Meyer hired longtime defensive line coach Joe Cullen as his coordinator and tasked him with switching to a 3-4 scheme and getting the most out of defenders like Josh Allen, K’Lavon Chaisson and Myles Jack.