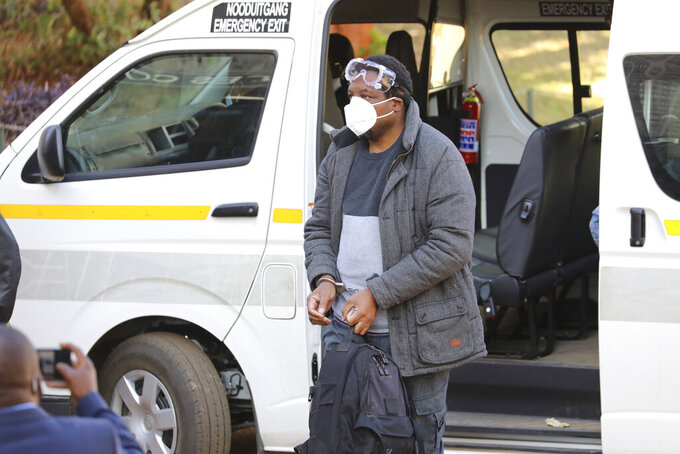 Zimbabwe journalist Hopewell Chin'ono appears at the magistrates courts while handcuffed in Harare, Wednesday, July, 22, 2020. Chin'ono known for exposing alleged government corruption is now accused of plotting against the government. Hopwell Chin'ono appeared alongside Jacob Ngarivhume, an opposition politician who is accused of conspiring with to mobilize anti government protests planned for July 31.(AP Photo/Tsvangirayi Mukwazhi)

HARARE, Zimbabwe (AP) — A Zimbabwean journalist in jail for more than a month is “visibly ill” and exhibiting symptoms “consistent with COVID-19,” one of his lawyers said, but prison authorities claim the journalist “is well.”

Journalist Hopewell Chin’ono looked ill, according to Doug Coltart, a lawyer who visited the reporter in jail Monday.

A private doctor who later assessed the scribe noted that Chin’ono was suffering from “a headache, fever and distorted taste. It’s consistent with COVID-19,” said Coltart.

“Tests were done and we are waiting for the results. Fears of COVID-19 are real because people have been testing positive for the virus in jail. It is overcrowded and the personal protective equipment is not enough,” Coltart said Tuesday.

Chin’ono has been in detention for more than a month after he was arrested together with opposition politician, Jacob Ngarivhume, and accused of inciting violence for publishing on social media his support for an anti-government protest. That protest was foiled by the military and police on July 31.

The duo’s lawyers have previously told the courts that they fear for their clients’ safety as overcrowding, poor diet and lack of protective equipment put their health at risk.

A prisons' spokeswoman told the state-run Herald that reports of Chin’ono’s illness had taken them by “surprise.”

“As far as we are concerned, he is well,” the Herald on Tuesday quoted prisons spokeswoman Meya Khanyezi as saying.