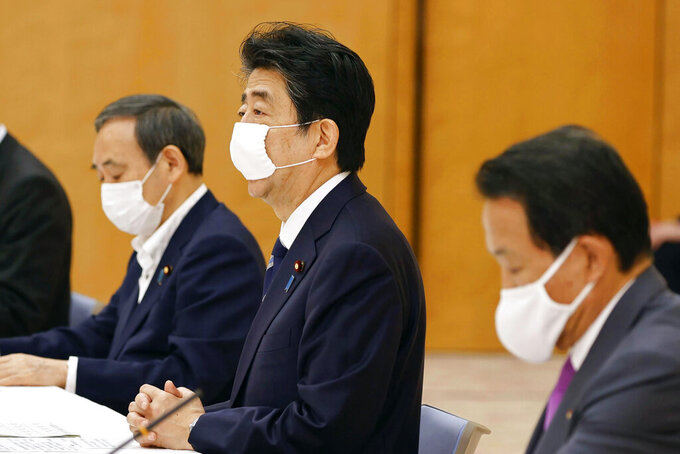 Japan's Prime Minister Shinzo Abe, center, speaks during a meeting of government and ruling party officials at his office in Tokyo Wednesday, May 27, 2020. Japan’s Cabinet has approved a proposed 32 trillion-yen ($296 billion) supplementary budget to help fund measures to cushion the blow to the economy from the coronavirus pandemic. (Kyodo News via AP)

TOKYO (AP) — Japan’s Cabinet approved a proposed 32 trillion yen ($296 billion) supplementary budget on Wednesday to help fund $1.1 trillion in measures to cushion the blow to the economy from the coronavirus pandemic.

The extra funding under consideration includes support for small businesses, funding for improved medical systems and subsidies for local governments. The budget also will pay for measures to help prepare for possible future waves of infections, including development of vaccines and treatments for COVID-19.

Japan’s economy, the world’s third largest, slipped into recession in the last quarter and was already slowing before the pandemic hit because of weakening consumer spending and global demand.

The combined stimulus compiled so far totals more than 230 trillion yen ($2.1 trillion), or about 40% of Japan's economy, Prime Minister Shinzo Abe told a meeting of officials on Wednesday.

“I will defend the Japanese economy at any cost against this once-in-a-century crisis,” Abe said.

A pandemic state of emergency still in effect for Tokyo and several other areas ended Monday as the government began trying to get back to business.

The government only made voluntary requests for people to stay home, but the precautions hit consumer spending and other business activity. A virtual shutdown of tourism also has taken a huge toll, while the global economic fallout from the pandemic is hammering businesses everywhere.

Japanese are still being asked to take care to avoid spreading the coronavirus, which has infected more than 16,650 people in Japan and killed 858.

The finance minister, Taro Aso, said quick action was needed, noting that it would likely take a long time for things to get back to normal.

“Under such conditions, we need to firmly protect businesses that are continuing to operate, and employment, and to be fully prepared for any so-called ‘second wave,'” he said.

This story has been corrected to show that the state of emergency ended on Monday, not Tuesday.