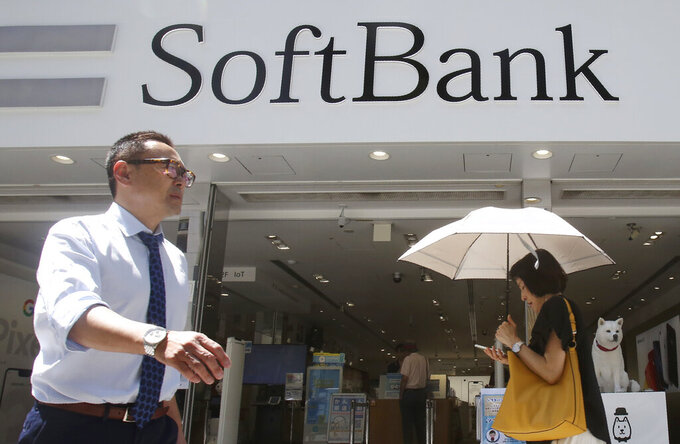 TOKYO (AP) — Japanese technology giant SoftBank Group Corp.'s said Tuesday that its profit rose 12% in April-June from a year earlier as its investments added to its coffers, including sales of its shares in U.S. carrier T-Mobile.

SoftBank, whose group includes the carrier that introduced the iPhone to Japan, said it has been shoring up its cash reserves.

Chief Executive Masayoshi Son said the company already has raised in several months nearly all the 4.5 trillion yen ($41 billion) it had promised in March to attain within a year.

But he acknowledged worries about a second or third wave of the coronavirus pandemic.

The company compared the crisis to the hard times of the Great Depression of the late 1920s and early 1930s.

SoftBank announced last month that it’s setting up a new subsidiary company to carry out coronavirus tests and will start giving them first to its employees and members of the SoftBank Hawks professional baseball team.

SoftBank got a lift from U.S. carrier Sprint’s merger with T-Mobile, a deal in the works for a few years that was finally completed in April. That means Sprint is no longer part of SoftBank’s group or earnings.

Other companies in the SoftBank fold include British “Internet of Things" company Arm and Brightstar Corp., a U.S. wireless service provider. The Pepper humanoid robot is also a SoftBank product.

SoftBank also benefited from its Vision Fund investments, as it sold parts of its global portfolio, and stock prices of its holdings recovered, it said.

Analysts have constantly expressed doubts about some of the investments. But even global office-space sharing company WeWork may be doing better than expected thanks to the expansion of remote working.

WeWork just opened in a new locale in Japan, in northern Sendai. It already operates in Tokyo, as well as Nagoya, Fukuoka and other urban areas in Japan.

Son said in an online news conference that the company was defying the naysayers, including analysts and reporters who had for years predicted that SoftBank might collapse.

“Defense is the best offense,” he said, showing photos of warring samurai.

He said the company has raised cash, its debts are decreasing and his longtime vision of a global digital shift was correct and being accentuated by the virus outbreak.

“Our investor value is rising,” he said.