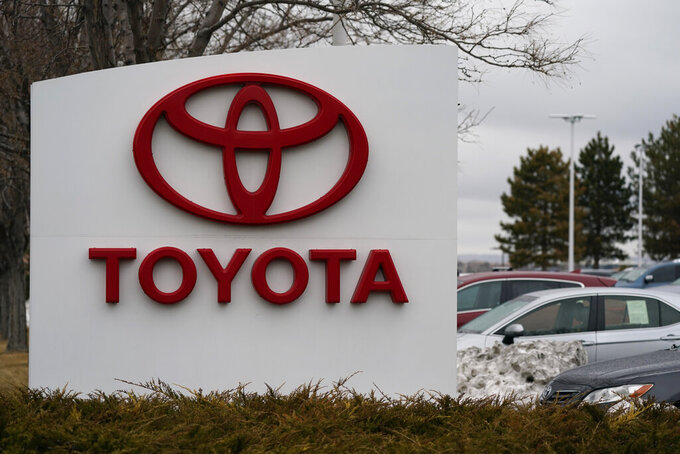 The company logo adorns a sign outside a Toyota dealership Sunday, March 21, 2021, in Lakewood, Colo. Toyota reported Wednesday, May 12, 2021, its January-March profit more than doubled from the previous year to 777 billion yen ($7 billion), as the Japanese automaker’s sales gradually recovered from the damage of the coronavirus pandemic. (AP Photo/David Zalubowski)

TOKYO (AP) — Toyota reported Wednesday its profit more than doubled in January-March from a year earlier to 777 billion yen ($7 billion), as the Japanese automaker’s sales recovered from the pandemic.

The pandemic has dented sales and demand in many businesses, but Toyota has shown resilience while riding out a global shortage of semiconductors that’s slammed many automakers.

Cost-cutting efforts helped keep it in the black, said the manufacturer of the Prius hybrid and Lexus luxury models, which is based in Toyota city, central Japan.

Toyota is forecasting a 2.3 trillion yen ($21 billion) profit and 30 trillion yen ($276 billion) in sales for the fiscal year through March 2022. The company expects vehicle sales to recover both in Japan and abroad.

Toyota and Lexus brand vehicle sales are projected at 9.6 million vehicles for this fiscal year, up from nearly 9.1 million units for the last fiscal year.

The company said it expects to sell 2.8 million electric vehicles, up 130% from a year earlier.

Operating Officer Kenta Kon told reporters that despite a dent in sales from the pandemic, demand recovered toward the latter part of the fiscal year.

Toyota said in a statement it had learned to respond to crises, especially in encouraging quick action on the ground, learning from experiences during the global financial crisis, the 2011 earthquake, tsunami and nuclear disaster in northeastern Japan, and flooding in Thailand later that same year.

The company said it is determined to stay in the black, despite recent surging COVID-19 infections in Japan.