Jenkins among 5 ruled out, Crowder questionable for Jets 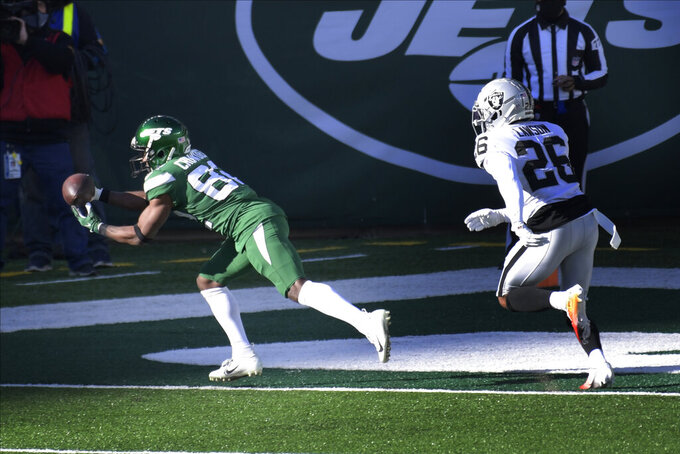 NEW YORK (AP) — The winless New York Jets will be short-handed in Seattle.

Linebacker Jordan Jenkins, wide receiver Denzel Mims, right guard Greg Van Roten and safeties Ashtyn Davis and Bennett Jackson were all ruled out by coach Adam Gase on Friday for the team's game against the Seahawks on Sunday.

Leading receiver Jamison Crowder and offensive lineman Pat Elflein are questionable, as is running back Frank Gore, whose availability is uncertain after he completed the NFL's concussion protocol.

Crowder, who has 40 catches for 503 yards and five touchdowns, injured a calf early in practice Thursday and didn't participate Friday. Mims had previously been ruled out while he takes care of a family matter at home in Texas. That would leave the Jets with only one of their starting receivers: Breshad Perriman, who was limited the first two days of practice with a shoulder ailment but practiced fully on Friday.

“It's not ideal, but there's really nothing anybody can do about it,” Gase said of the injuries at wide receiver.

Jenkins, the team's longest-tenured player, has been dealing with a shoulder injury. Gase said Jenkins won't be sidelined for the season, but the injury will keep him out at least one game.

“He wanted to try to go this week,” Gase said. “It's just really his range of motion is not where he needs it to be to play at the level he needs to play at. ... Him going out there and really playing with one arm, that's not fair to either of us, as far as the team or for him."

Van Roten has a toe injury, leaving New York without its starting guards. Alex Lewis is on the non-football injury list to deal with a personal issue. Elflein has filled in the last two games for Lewis, but his availability is also uncertain.

With Davis and Jackson both out, the Jets had only Marcus Maye and Matthias Farley as healthy safeties on the active roster.

When asked what the Jets are planning at the position, Gase quipped: “We're looking for volunteers.”

The team announced it signed safety J.T. Hassell, who requested his contract on New England's practice squad be terminated Wednesday so he could sign elsewhere. It appeared unlikely that Hassell would be able to clear COVID-19 protocols and join the Jets in time to play Sunday.

Gase said players have cross-trained positions throughout the season and New York will have some options. Cornerback Elijah Campbell has previous experience playing safety, so he could be an option. Saquan Hampton, currently on the practice squad, is another possibility.

Gore was injured last Sunday on his first carry against Las Vegas. Ty Johnson and Josh Adams replaced him, and Johnson ran for a career-high 104 yards while Adams had 74.

Johnson was added to the team's injury report with a knee issue, but he fully participated in practice.