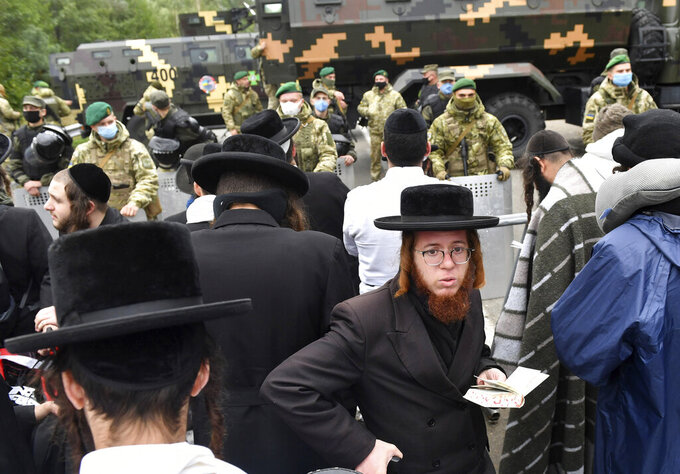 KYIV, Ukraine (AP) — Thousands of Hasidic Jews, stuck at the Ukrainian border for days due to coronavirus restrictions, have turned back without reaching their destination, the grave of a revered rabbi, officials said Friday.

About 2,000 ultra-Orthodox Jewish pilgrims had traveled through Belarus in hope of reaching the Ukrainian city of Uman to visit the grave of Nachman of Breslov, an important Hasidic rabbi who died in 1810.

Thousands of the Hasidic pilgrims visit the city each September for Rosh Hashana, the Jewish new year. It’s celebrated Sept. 18-20 this year, and some pilgrims had managed to get to Uman before Ukraine closed its borders in late August amid a surge in COVID-19 infections. Thousands of others traveled via Belarus, which hasn’t barred foreign visitors from entering.

Authorities in Ukraine and Belarus said Friday that Hasidic pilgrims cleared the no-man's land between the two countries where they camped for several days, some sleeping in makeshift tents and others on the ground. Belarusian border guards said that less then a dozen of them remained in the area.

At the same time, Ukraine's border guards agency said Friday that it turned back several Hasidic pilgrims who tried to enter the country from Poland, Hungary and Romania.

As the pilgrims spent days stuck on the Ukrainian border, Ukraine and Belarus engaged in angry bickering over the standoff.

On Wednesday, Ukraine’s presidential office accused Belarusian authorities of issuing misleading signals to the pilgrims that they would eventually be allowed to cross the border. Belarusian officials shot back accusing Ukraine of “inhumane” treatment of the pilgrims, and offered to provide buses to drive the pilgrims to Uman and back to Belarus.